Penticton Vees earn a shutout victory over the Vernon Vipers 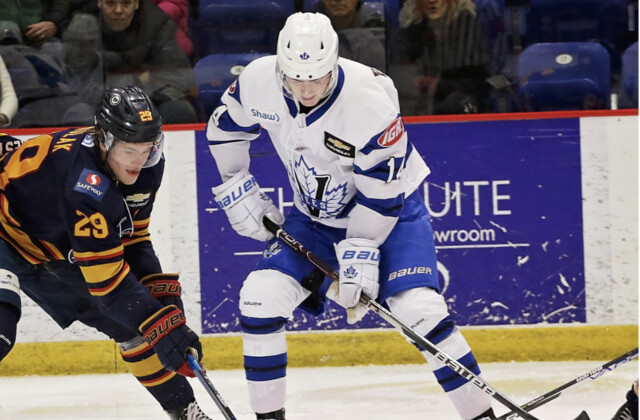 Penticton Vees returned to their first game in 11 days with a third consecutive victory, winning 4-0 against the Vernon Vipers on Wednesday at Kal Tire Place.

The first goal came from Brett Moravec late in the first period, redirecting Josh Niedermayer’s shot to get it in between the Viper's goalposts.

Bradly Nadeau doubled Penticton’s lead in the final two minutes of the second period when he took a pass from Jackson Nieuwendyk and squeezed his shot through the arm of Vernon’s Ethan David.

In the third, Aydar Suniev took advantage of a Vees’ power play to put the visitors up by three, firing over the goalie’s glove at 2:41.

Brady got his second of the game with four minutes left in the third. Getting a pass cross-ice pass from older brother Josh, Bradly tapped the puck into the net for the Vees' final goal.

The Vees' next game is on Saturday when the face off against the Cranbrook Bucks at 6 p.m. 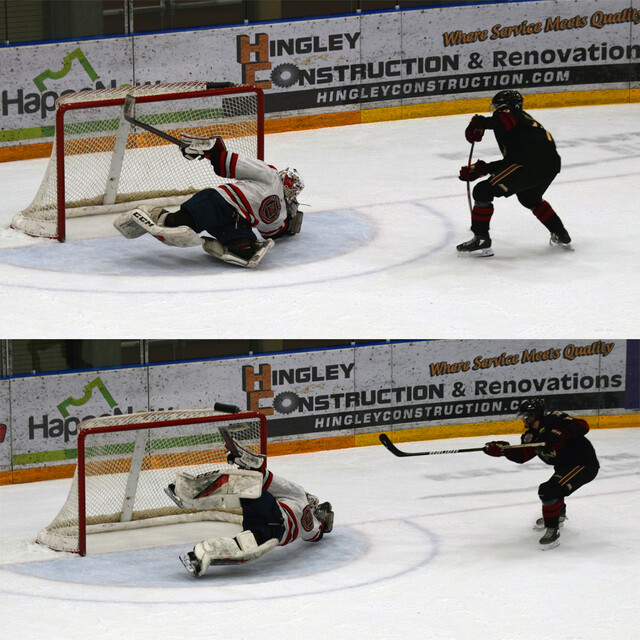 Rylee Hlusiak scored the only goal of the shootout Wednesday night as the West Kelowna Warriors stormed back for a 4-3 shootout win over the visiting Merritt Centennials Wednesday.

But, the win came at a cost.

Already without the services of defencemen Matt Fusco and Nolan Hayes to injury, 19-year-old blueliner Dylan Brooks needed to be helped off the ice with what appeared to be a leg injury after he was hit hard in front of the Warriors bench just seven seconds into the third period.

He did not return.

Warriors head coach Simon Ferguson was unable to update his condition after the game except to say it was a lower body injury.

As for the game itself, the Warriors looked like a team shaking off the rust after a long 10-day layoff because of the league's all-star weekend in Penticton.

It took them a while to get rolling and, when they did, they found themselves in a 3-0 hole.

"I thought (Merritt) played well. I didn't think we had a lot of buzz a lot of energy in the first little bit of the first and the first bit of the second," said Ferguson.

"Obviously they got up and built a pretty good lead, but credit to the guys for coming back."

The Centennials led 1-0 after one on a strange goal nine minutes into the game.

Christian Lowe's initial shot on a breakaway sailed well high and bounced off the end glass. The puck caromed toward the net where Jaxson Murray was waiting to bunt it past a startled Justin Katz.

The Centennials increased the lead to three before the midway point of the second.

Ryan Spinale off the rush from the right faceoff circle then Murray again from the same spot on a power play beat Katz, spelling the end to his night after allowing three goals on just 13 shots.

Cayden Hamming came in and shut the door the rest of the way, giving the offence a chance to get back into it.

Just over a minute later they capitalized. Noah Laframboise beat Johnny Hicks with a blast from the point for his first BC Hockey League goal.

The Warriors took over the game from there.

Ben MacDonald cut the deficit to one deflecting Brooks' shot from the point. The officials huddled together to talk about the goal but determined MacDonald did not hit the puck with a high stick.

The officials again were called upon to discuss what turned out to be the game tying goal at 19:03 of the second.

Hicks argued Kailus Green, stationed at the top of the crease, interfered with his when a point shot from Aiden Reeves deflected off Green and past Hicks.

Despite the protests, that goal was also allowed to stand.

A cautious third period was scoreless setting the stage for a dramatic overtime.

While neither team was able to score, both iron on successive rushes. Brennan Nelson hit the cross bar seconds after Merritt clanged one off the post at the other end.

MacDonald had a great chance to win it, but Hicks stoned him on a clear breakaway.

Overtime solved nothing paving the way for the shootout.

After the first five shooters were stopped, Hlusiak stepped up with the game on his stick and made no mistake.

Hlusiak deked to the forehand, cut across the slot and beat Hicks from a sharp angle to earn the Warriors the extra point.

The win was the Warriors fifth in a row, and moves them to within three points of idle Cranbrook in the battle for second in the Interior Division.

The Warriors now hit the road for seven in a row, beginning Friday night in Cranbrook. They'll travel to Salmon Arm Saturday.

Just who will be wearing the jersey's will be determined over the course of the next 24 to 48 hours. 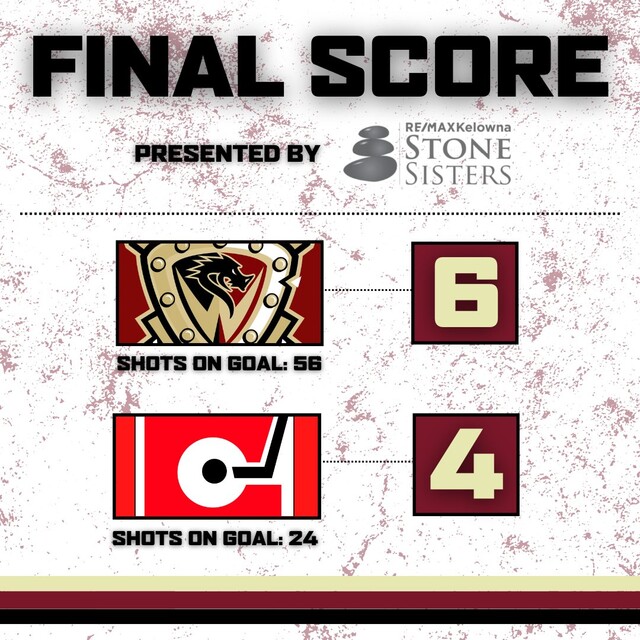 The teams were deadlocked 3-3 heading into the final 20 minutes before Devlin and McDonald broke the deadlock sending the Warriors to their fourth win in a row.

The Warriors appeared on their way to a lopsided victory after just 20 minutes.

They dominated the Centennials in the first, peppering 23 shots on starter Johnny Hicks in building up a 3-0 lead.

But, the Centennials didn't go away, Despite being outshot 18-8 in the second, it was the Centennials who did all the damage, scoring three unanswered of their own to draw even after 40 minutes.

Michael Salandra, Brennan Nelson and Felix Caron staked the Warriors to the 3-0 lead.

Jaiden Moriello, after the Centennials had drawn to within one, closed out the scoring with an empty net goals in the final minute.

McDonald also had a pair of assists to go along with his goal. He now has five points over his last three games.

The Warriors peppered 56 shots at Hicks, the second most in a regulation time game in team history. It's also the most shots the team has ever recorded on the road.

The Warriors, 20-10-4-0, moved to within three points of idle Cranbrook in the race for second in the Interior Division.

The team is off now for 12 days as the league gets ready to hold its all-star festivities in Penticton next weekend.

The Warriors return to the ice Wednesday, Jan. 25 when they entertain these same Centennials. 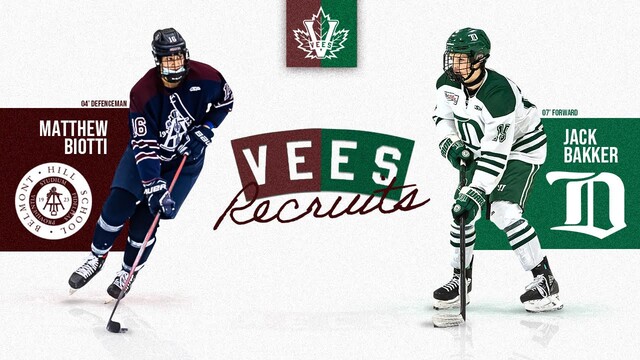 eman Matt Biotti have committed to the team for the 2023-24 season on Saturday.

“We are proud to have won each of these recruiting battles,” Vees President, General Manager & Head Coach, Fred Harbinson said. “Jack and Matthew will be exciting players for our fans to watch and will allow our program to compete at the level we are accustomed to which is playing for a BCHL championship.”

Bakker, age 15, currently plays for Delta Hockey Academy’s U18 Prep team in the Canadian Sport School Hockey League (CSSHL). Hailing from Surrey, he has 15 points in 13 games this season.

Bakker is tied for first on his team in goals with 11 and is fifth in points. He was recently named to Team B.C.’s U16 roster for the 2023 Canada Winter Games, in Prince Edward Island next month.

Biotti, 18, is in his senior season at Belmont-Hill School in Massachusetts. The defender has been limited to four games due to injury but posted 18 points (5G, 13A) in 26 games as a junior during the 2021-22 season.

The Cambridge-born player has already solidified his college future, as he has committed to Harvard University.

The Vees organization would like to welcome Jack and Matt, along with their families, to Penticton and the South Okanagan.

The Vees are back home Saturday night to play the Cowichan Valley Capitals with the puck drop is 6:00 pm. It’s “Faith Night,” sponsored by The Bumwrap.

Tickets are available at the Valley First box office, or online at www.valleyfirsttix.com 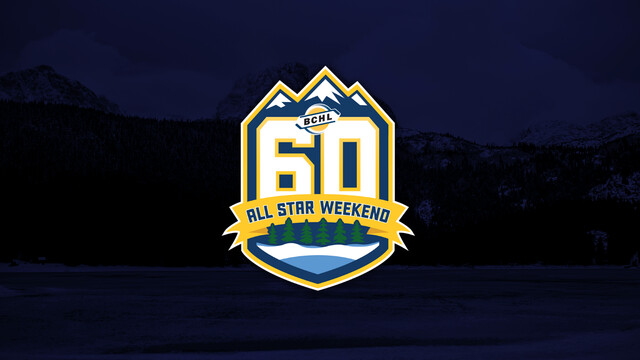 The BCHL will be seeing Hall of Famers, Stanley Cup champions and longtime NHLers as participants in the outdoor Alumni & Friends Game, as part of the 60th Anniversary All-Star Weekend in Penticton.

The event features a Top Prospects Game and outdoor all-star tournament, skills competition, alumni and friends game and much more.

The game will be 3-on-3 with two teams of six skaters and one goalie facing off in three 10-minute running time periods. There will be a five-minute break between each period

The game will also feature two BCHL goalies between the pipes. Carter Richardson from the Salmon Arm Silverbacks and Justin Katz from the West Kelowna Warriors, who are both participating in the Top Prospects Game the night before, will play in net.

The game will also feature a handful of BCHL sponsors taking the ice with the Alumni & Friends.

HockeyTV be broadcasting the game live and on demand.