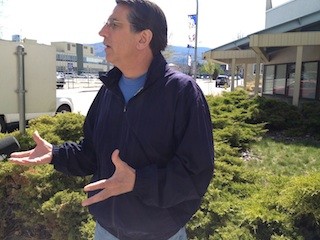 Ashton says crews are still working on the flooding situation at Chute Lake.

Those, living west of Chute Lake, who were evacuated on Friday are not able to return home as of yet.

There are reports the flood waters have rescinded since the Evacuation Order was placed.

UPDATE: 10 p.m. Friday
1. Residents west of Chute Lake including Indian Rock have been placed on an Evacuation Order. Personnel from Search and Rescue and RCMP have made personal contact or left notices at each affected residence.
2. The area is currently secured by RCMP personnel.
3. Residents are asked to immediately register with Emergency Social Services (ESS) at Naramata Fire Hall. Telephone: (250)496-5319 non-emergency number
4. As of 2000hrs, twelve (12) families have registered at ESS with eighteen (18) residents provided accommodation in Penticton.
5. Province of British Columbia ministry staff have assessed the potential flooding and are undertaking remedial action which includes increasing a controlled flow of water. Staff will be on site overnight with a further assessment in the morning.
6. Access to the Kettle Valley Railway (KVR) in this area is closed. Barricades have been put at place at Gillard Road in Kelowna.

An evacuation order has been put in place for residents west of Chute Lake including Indian Rock (North Naramata Road, Indian Rock Road, Glenfir Road, Summerset Lane, Chute Lake Road, and Naramata Road) by the Regional District of Okanagan-Similkameen due to immediate danger of life and safety due to the danger of a flash flood.

Members of the RCMP, Penticton Search & Rescue and Naramata Fire Dept. will be expediting this action.

Residents are required to report to the Naramata Fire Department for registration.

There is concern the dam above the homes might give-way. Water has already gone over the top of the dam and it is being held back by a service road. Emergency personnel are concerned if the road were to give out the flood of water could be devastating.

Around 90 people were asked to leave their homes and sign in at the Naramata Fire Hall as a pre-emptive measure said Naramata Fire Chief Wil McCutcheon.

"Right now there is a dam at Chute Lake and we are concerned about water levels rising and causing further problems down stream," he said. "There are roughly about 40 homes there and could be about 90 people or more."

McCutcheon said there have been evacuations in the area, north of Naramata, in the past because of fires, but they haven't dealt with flooding. 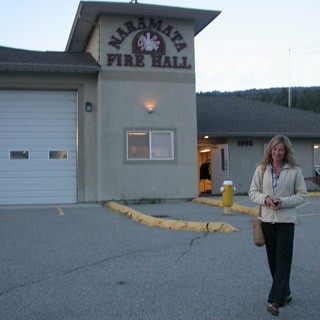 Photo: Deborah Pfeiffer
Jacqueline Beck of Indian Rock after she signed up at the fire hall in Naramata

Jan Gladstone of Indian Rock said her main concern was finding a place for her dogs and cats, as she signed in.

"I've arranged something for the animals and I will stay at a hotel in Penticton," she said. "Right now I am hoping for a positive outcome."

An Emergency Operation Centre (EOC) is set up in Penticton and the people there can deal with questions or enquiries from the general public.

For information on the current conditions of the potential flash flood residents of BC can call the same number, or follow media reports.