Do you agree with the province's push to get kids to take the flu shot? 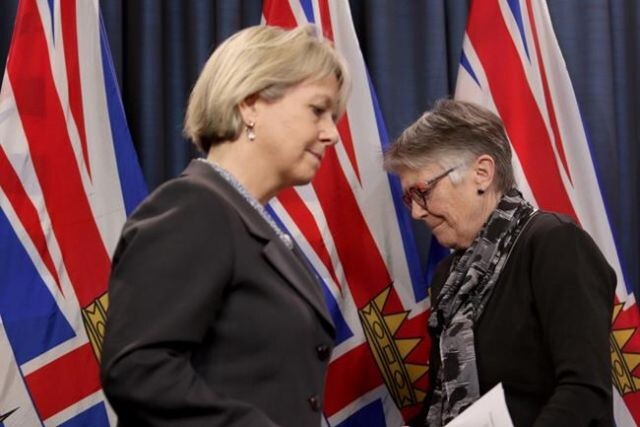 Photo: /Chad Hipolito
The B.C. government will use its provincial health registry system to contact parents of unvaccinated children in an attempt to increase flu vaccine rates among the province's youngest. according to provincial health officer Dr. Bonnie Henry (left).

Interior Health recorded 1,000 daily emergency room visits due to respiratory illness in November, up from about 300 per day in a typical November.

The government will be using its provincial health registry to contact parents in an attempt to increase flu vaccine rates for children.

While the province is on track for a record number of people getting their flu shot this year, Dr. Ballem says only 20 per cent of children under five have been vaccinated.

Ballem says they'll be sending texts and emails to families of about 150,000 children under five inviting them to make appointments to get vaccinated.

Provincial health officer Dr. Bonnie Henry says after two years of low rates of flu, mostly due to travel restrictions, the province is seeing a "dramatic increase" in illness and it arrived sooner than normal.

Henry says there is still time for people to get a flu vaccine to protect themselves and their children, especially as the holiday season approaches.

Health Minister Adrian Dix says visits to provincial emergency rooms had been averaging 6,700 per day, but that is now peaking up to 6,900 patients daily, with extra pressure on B.C. Children's and Fraser Health hospitals.

Henry says it is believed this season's flu vaccine provides between 50 and 70 per cent protection.

Interior Health said last week the region saw approximately 3,300 pediatric respiratory-related emergency room visits, or an average of about 131 per day across the health authority region. A typical November would see about 1,350 visits.

February 7, 2023 - 9826 votes
Would you rather go out with your significant other on Valentine's Day or stay in?

February 2, 2023 - 9821 votes
Should school names be changed in light of modern day views of history?

Would you rather go out with your significant other on Valentine's Day or stay in?