The fur was flying at RLP 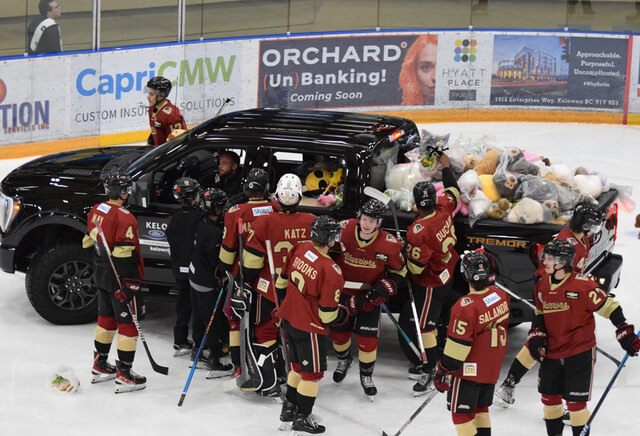 Kailus Green got the party started and Jaiden Moriello made sure there were smiles all around at the end as the West Kelowna warriors edged Vernon 4-3 on Teddy Bear Toss night at Royal LePage Place Friday.

Moriello, the Warriors representative at next month's BCHL all-star game in Penticton forced the game into overtime, then scored the only goal in the shootout to secure both points for the Warriors.

The night started on a festive note when Green notched his seventh of the campaign, deftly deflecting Jake Bernadet's pass from a sharp angle high over Vernon netminder Roan Clarke just seconds after a Vernon penalty had expired.

The goal sparked an avalanche of teddy bears and stuffed animals of all kinds from the stands onto the ice.

It took more than five minutes before the hundreds of stuffed animals were collected and driven off the ice to be distributed to seniors home and the Salvation Army.

Once play resumed, the Vipers had a great chance to get the equalizer when Jonathan Horn awarded a penalty shot after he was hauled down on a shorthanded breakaway.

Justin Katz was equal to the task, turning aside Horn who tried to go low to the stick side.

The game was tied at 1-1 early in the second when Ben McDonald scored his eighth from the right circle, but it was the Vipers who gathered some momentum scoring twice in a span of 2:21 to take the lead.

The go ahead goal spelled the end of the night for Katz who was slow to get to the far post, allowing Horn to beat him to the front of the net on a wraparound. The play started innocently enough when Horn fell down while trying to spin by a defender in the Warriors end.

He got up and raced around the net, completing the wraparound to put the Vipers up one.

Katz, who stopped nine of 12 shots over 26 minutes and 45 seconds of work, gave way to Angelo Zol who shut the door the rest of the way.

And, while Zol was perfect for nearly 40 minutes, his counterpart at the other end did everything except cook the hot dogs and park the cars.

Clarke was outstanding over the last half of the game making several incredible saves including a pad save off Luke Devlin who made a power move across the top of the crease from the right wing with the Warriors shorthanded but doing everything they could to generate offence.

Felix Caron had the best chance to tie it but his shot from in close with with an open net to shoot at following a perfect feed from Brennan Nelson on a two-on-one, went through the crease.

But, it was Moriello who made sure the Warriors would have a chance to win it.

With less than flour minutes left in regulation, he took a drop pass from Nelson in the right faceoff circle and roofed a wrist shot past Clarke to force overtime.

Neither team was able to score during an energetic overtime, sending the game to a shootout.

Defenceman Dylan Compton had the best chance for the Vipers in the shootout, but his shot to the far side rang off the post.

With zeros on the board, Moriello stepped up, faked a shot from in close, went to his forehand and slid the puck into the open net.

"We brought him in to be one of our leading scorers and be a guy that can produce and he's doing just the every day," said head coach Simon Ferguson of Moriello.

"He works, he competes and he earns it."

It was the Warriors second win in a row after dropping four straight.

To extend that streak they'll have to do something no one has done this season, beat the Penticton Vees.

The two teams meet Saturday night at the South Okanagan Events Centre, the site of Penticton's 11-2 drubbing of the Warriors two weeks ago.

In fact, over the span of three meetings, the Vees have put up double digits on the Warriors on two occasions.

Ferguson says the Warriors will be to stay out of the penalty box against a team hitting at nearly 37 per cent efficiency with the man advantage.