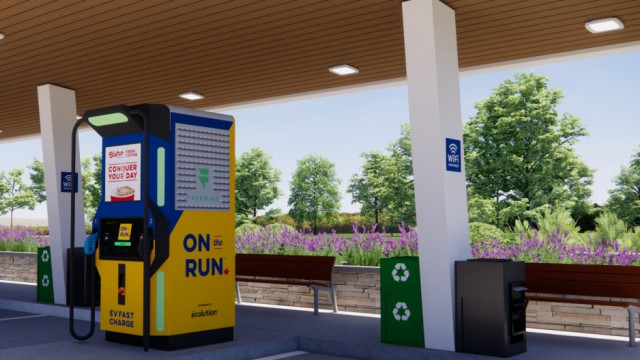 Photo: Parkland.
On the Run retail gas stations will have two to four EV fast chargers.

Parkland Group (TSX:PKI), which last year announced plans to build out 25 electric vehicle fast charging stations in B.C. and Alberta, now plans to double that by 2024, thanks to $6.8 million in federal and provincial grants.

The company announced Friday it plans to install 50 EV fast-charging stations at its retail gas stations between Victoria and Calgary. Most of the 25 installations that the company announced last year are expected to be installed by the end of this year, with another 25 to be added by early 2024.

Parkland owns more than 1,800 retail gas stations across Canada, including Chevron and On the Run branded gas stations. The fast charger additions will triple the number of fast-charging stations in Metro Vancouver, the company said in a news release.

The 200-kilowatt fast chargers will typically recharge most electric vehicles in 20 to 25 minutes. Parkland said On the Run stations will have two to four fast-charging stations by early 2024.

Parkland is receiving $5 million from Natural Resources Canada to help Parkland double the number of charging stations it had planned to install between Victoria and Calgary. Another $1.8 million is coming from the provincial government.

"With support from NRCan and the Government of British Columbia, we are doubling the size of our previously announced ultra-fast network, from 25 to 50 locations," said Darren Smart, Parkland's senior vice president of energy transition. "Our network will help eliminate range anxiety for EV drivers and by offering high-quality convenience and food choices, we aim to deliver industry leading customer amenities and experiences.”

“B.C. is leading North America in the uptake of zero emission vehicles and is recognized as a global leader in Electric Mobility Canada’s 2022 report ranking provinces on the ease of going electric in a time of climate crisis and gas price inflation,” said Bruce Ralston, B.C. minister of Energy, Mines and Low Carbon Innovation.

“As of September, EVs made up 17.5% of new light-duty passenger vehicles sold this year in British Columbia."