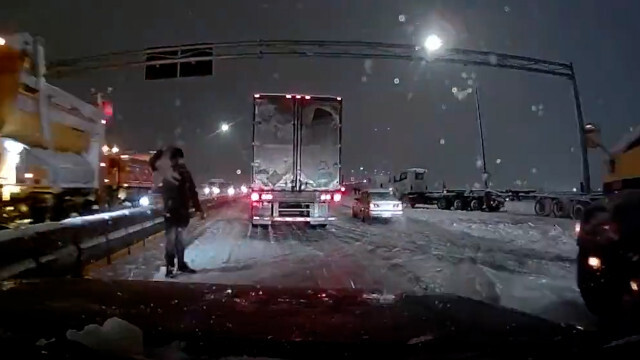 Photo: @Sodium229
The Alex Fraser Bridge was congested and closed for several hours Nov. 29, 2022, after a storm rolled through.

A major snowfall over the Lower Mainland Tuesday led to a dramatic increase in ICBC claims.

In a press release Thursday, ICBC says driver claims on Nov. 29 increased by 94 per cent compared to the Tuesday the week prior, almost doubling.

As of Dec. 1, there were 3,567 claims reported, stemming from crashes on Nov. 29. The day prior, before the snow fell across Metro Vancouver, just 1,445 claims were reported.

The snow knocked out power to thousands of homes across Metro Vancouver and Vancouver Island and caused mayhem on city roads and highways.

Some drivers reported commutes taking many hours longer than usual due to the significant snowfall and slippery roads.

The snow fell across much of the rest of the province as well, but it appears that drivers in the Lower Mainland were most impacted.

“With the possibility of more snow in the coming days and weeks ahead, ICBC is asking drivers to slow down and adjust their driving to winter conditions, and ensure their vehicle is prepared,” ICBC said in a press release.

ICBC says drivers should have proper winter tires on their vehicles when driving in the snow, and drivers should take it slow. Those who don't necessarily need to drive should consider taking transit or staying home when conditions worsen, ICBC adds.