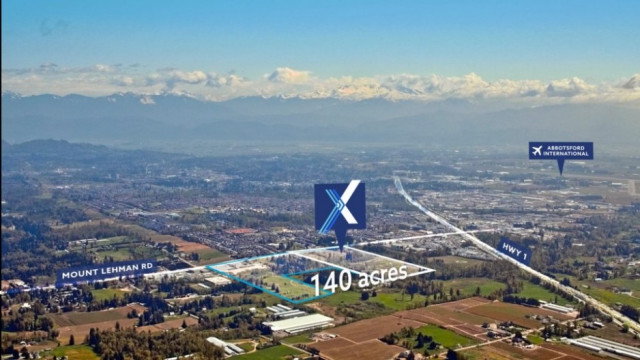 A new 140-acre industrial development in Abbotsford should help alleviate one of the tightest industrial markets in British Columbia.

With no new space under construction this year, Abbotsford has a 0.2 per cent vacancy rate – or about 17,000 square feet – within its 9.4 million square feet of industrial real estate, according to a third-quarter report from Colliers.

QuadReal Property Group and Hungerford Properties announced Nov. 17 that the developers have received regulatory approval to begin construction of the first two buildings within the Xchange Business Park on Mount Lehman Road in Abbotsford.

The large business park is slated to include 11 buildings and 1.3 million square feet of light industrial space.

The land is part of the acreage approved for exclusion by the Agricultural Land Commission in 2005. The Xchange will also dedicate about 40 acres to green space and will include an amenity building that recognizes the nearby Matsqui First Nation, according to a press release.

The facilities are designed to alleviate strains to the supply chain through such features as dock loading, high ceilings and immediate access to the Trans-Canada Highway, the released stated.

“The new Xchange Business Park not only substantially increases premium industrial space in Abbotsford, it will also add much needed jobs in our growing community,” said Abbotsford Mayor Ross Siemens. “Key economic projects like this help further cement Abbotsford as the regional economic and cultural hub of the Fraser Valley.”

From a jobs perspective, Abbotsford is already a leader in the logistics sector. While total employment in the area increased by 10 per cent between 2015 and 2019, employment in transportation and warehousing grew three times as quickly.

The Xchange project is expected to generate an estimated 1,000 direct jobs in Abbotsford and $23.6 million in provincial taxes, according to the developers.