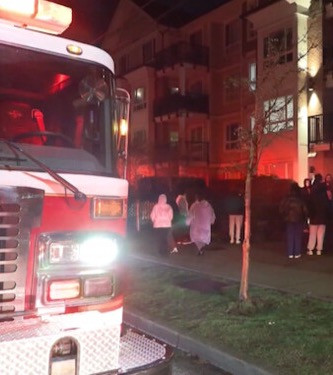 Photo: .
The beached Metlakatla I barge near McLoughlin Point. Transport Canada says the barge has no fuel on board. DARREN STONE, TIMES COLONIST

An empty Lafarge cement barge that went adrift in windy conditions after a towing connection broke Tuesday afternoon in Victoria Harbour has no fuel on board and poses no threat to people or the environment, Transport Canada says.

The barge Metlakatla 1 was outbound and being towed by the tug Ocean Greg when the incident occurred about 3:35 p.m.

It washed up on the shore between McLoughlin Point and Harrison Island, near the regional sewage-treatment plant. Nothing in the area of the plant was affected, the Capital Regional District said.

Transport Canada said Wednesday that several water pumps have been arranged to keep the barge stable and two tugs are stationed nearby.

The federal department said it is working with the owner on a safe recovery plan for the barge.

Coast guard spokeswoman Michelle Imbeau said the agency is no longer involved in dealing with the barge since there are no hydrocarbons on board.

The Transportation Safety Board said it is aware of what happened and is in the process of assessing the situation and gathering information.

Ian Robertson, chief executive of the Greater Victoria Harbour Authority, said the organization has no jurisdiction on the water, but is prepared to help if needed.

He said harbour authority facilities can be used to carry out repairs as required.

In March 2016, two barges ran aground off Dallas Road after coming loose in high winds from the tug HM Scout at Finlayson Point, near Clover Point.

One of the barges was carrying a crane and about 2,000 litres of diesel. It was moved first after the water was pumped out of it, going to Point Hope Shipyard for repairs.

The other barge was loaded with heavy scrap and construction debris.

Then in May 2016, a Vancouver Pile Driving barge broke loose, also in high winds, and dumped up to 30,000 litres of diesel fuel into Esquimalt Harbour after running aground in Plumper Bay. Most of the fuel was recovered by the next day.

Later in the month, a barge that had been listing in Bazan Bay in North Saanich ended up being towed to a facility in the Fraser River at Annacis Island. It was carrying a load of gravel for Vancouver Pile Driving that had to be transferred to another barge, which was towed to the same facility.