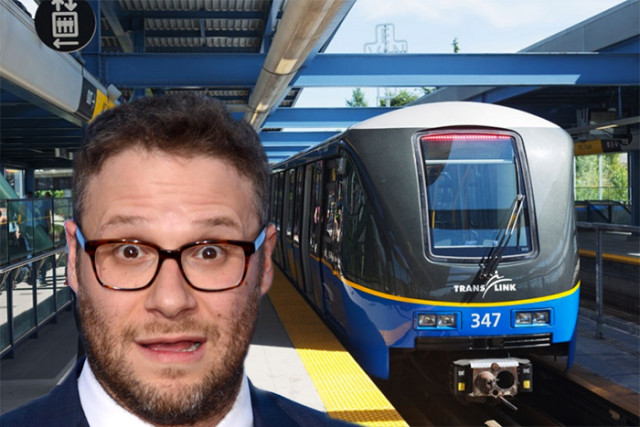 Photo: .
Seth Rogen and a SkyTrain. Kathy Hutchins/Shutterstock.com and TransLink

It feels like a lifetime ago Seth Rogen was the short-lived voice of Vancouver's Transit system.

The announcements lasted longer in Vancouver than they did in Toronto but ultimately they were taken down because some people found them irritating or obnoxious.

However, this bizarre moment in Vancouver transit was the subject of discussion on The Tonight Show with Jimmy Fallon last night.

Actor Gabriel LaBelle, 20, was on Fallon's show to promote his role in the new Steven Spielberg movie, The Fablemans which Rogen also stars in.

Like Rogen, LaBelle is also from here and he refers to Rogen as "a Vancouver icon."

LaBelle proceeds to tell Fallon about all of the somewhat anachronistic ways Vancouver has paid homage to Rogen, like the aquarium naming one of their octopuses Ceph Rogen.

“The impact he has on Vancouver teenagers and me and my friends, it’s like religious,” he says.

In 2018 Morgan Freeman was in the running for the announcements role, but TransLink pulled his voice in the wake of a sexual harassment investigation. Rogen tweeted "if they need a replacement now let me know" and TransLink replied to the actor giving him the job of voicing five various soundbites about courtesy and safety on the buses and SkyTrain.

"Mr. Rogen offered to work with TransLink free of charge and we accepted his offer in the pursuit of providing a better customer experience and to share pride in the region," Steve Vanagas, VP of customer communications and public affairs for TransLink, said in 2018.

After his voice was taken off the airwaves, TransLink posted outtakes for people to watch on YouTube.

People can watch the full LaBelle interview with Fallon on YouTube as well. LaBelle also discusses (not) smoking with Rogen and the experience of filming an intense scene in front of one of his heroes.

@fallontonight #GabrielLaBelle is a big @Seth Rogen fan: “The impact he has on Vancouver teenagers and me and my friends, it’s like religious.” #FallonTonight ? original sound - FallonTonight

With files from Elana Shepert and Bob Kronbauer.