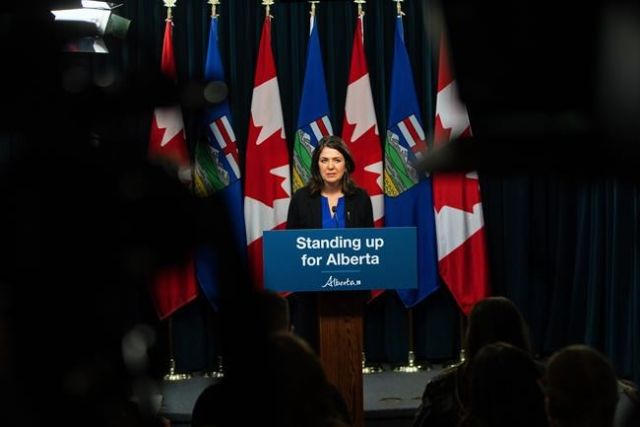 Photo: The Canadian Press
Alberta Premier Danielle Smith speaks at a press conference after the speech from the throne in Edmonton, Tuesday, Nov. 29, 2022. Constitutional law experts say it's unlikely Ottawa will rush to fight Alberta over a proposed sovereignty bill that would give the provincial government new powers to resist what it considers federal intrusion. THE CANADIAN PRESS/Jason Franson

Constitutional law experts say it's unlikely Ottawa will rush to fight Alberta over a proposed sovereignty bill that would give the provincial government new powers to resist what it considers federal intrusion.

Eric Adams, a constitutional law expert at the University of Alberta, calls the legislation "unprecedented" and an attempt to "rewrite the basic rules of federalism."

But he doesn't expect the federal government will engage.

"I think the more likely scenario here is that calm and cool heads will dictate that the federal response should be mostly a passive one — at least in the early days — and that they'll be eager to wait for this matter to get in front of the courts and then they'll decide how deeply involved they become," he said Wednesday.

"My strong suspicion is they don't want to be the main combatant."

The proposed Alberta Sovereignty within a United Canada Act introduced Tuesday would grant Premier Danielle Smith and her cabinet broad powers to rewrite provincial laws behind closed doors if a resolution passes in the house identifying a federal matter deemed unconstitutional or harmful to Alberta.

It would allow cabinet to direct Crown-controlled organizations, municipalities, school boards, municipal police forces and other entities to not use funds to enforce federal rules.

Smith said past efforts to work with the federal government haven't worked and Ottawa continues to interfere in constitutionally protected areas of provincial responsibility from energy to health care.

"I'm not going to take anything off the table,'' he said in Ottawa. "I'm also not looking for a fight."

Adams said the federal government would be playing into Smith's hands if it was seen to be singling out Alberta for different treatment given the largely hands-off approach it has used in its dealings with Quebec.

He said a case might be made before the courts that the bill is constitutional, but he doesn't expect that will happen.

"I think it goes too far in suggesting that provinces have the authority to order entities within the province to refuse federal laws," Adams said.

He said it also might make sense for Ottawa to wait until Alberta's scheduled provincial election in May.

"The other possibility is this is legislation that is not long lived. Certainly, the NDP has indicated that they don't support the bill and I imagine this will be one of the wedge issues in the election campaign to come."

Martin Olszynski, an associate law professor at the University of Calgary who focuses on energy, environment and natural resources, called the proposed legislation "extraordinary."

"The premier would have us believe that in order to be successful in her fight with Ottawa she needs to kneecap democratic accountability in the province of Alberta and I find that really hard to accept."

Olszynski said it's unlikely the bill, if passed, would give Alberta an advantage when it comes to natural resource development, since most federal resource laws apply directly to companies operating in the province.

"If you're Suncor and you want to build an oilsands mine, there's no scope there for the provincial government to say we're not going to enforce this legislation," he said.

Olszynski expects the sovereignty act will go to the courts in Alberta, but it will be driven by individuals and groups within the province.

"(Smith is) asking the legislature to give her an extraordinary power for her and her colleagues so I think there are going to be Albertans who looking at that situation aren't convinced that is a good way to go."