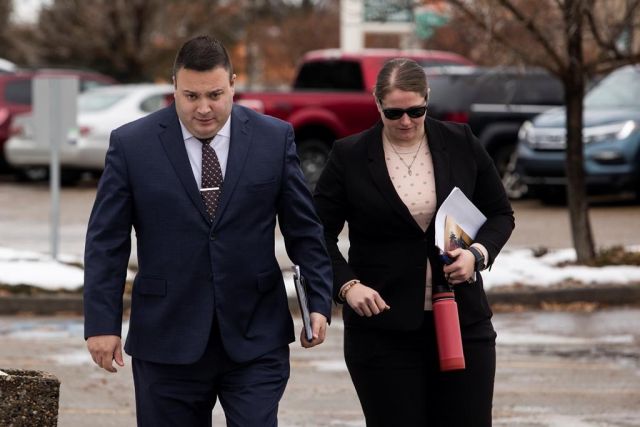 Photo: The Canadian Press
Cpl. Randy Stenger, left, and Const. Jessica Brown, return to court to resume their jury trial on charges of manslaughter and aggravated assault in Edmonton on Friday, Nov. 25, 2022. THE CANADIAN PRESS/Amber Bracken

An Alberta Mountie has testified she believed the man she and another officer are accused of killing was a suspect in a shooting a day earlier.

RCMP Const. Jessica Brown and Cpl. Randy Stenger have pleaded not guilty to manslaughter and aggravated assault in the fatal shooting of Clayton Crawford in 2018 near Whitecourt, Alta., northwest of Edmonton.

A jury has heard that RCMP were looking for a purple pickup truck that was spotted fleeing the scene of a shooting a day earlier in Valhalla Centre, a hamlet more than 300 kilometres northwest of where Crawford was killed.

Court heard Brown, Stenger and another officer approached the vehicle at a rest stop near Whitecourt, where there was a struggle between the officers and Crawford.

The jury heard that 11 shots were fired by Brown and Stenger, 10 of which hit Crawford.

Brown and Stenger have pleaded not guilty and their defence lawyers have said that the two Mounties acted in self-defence, thinking their lives were in danger.