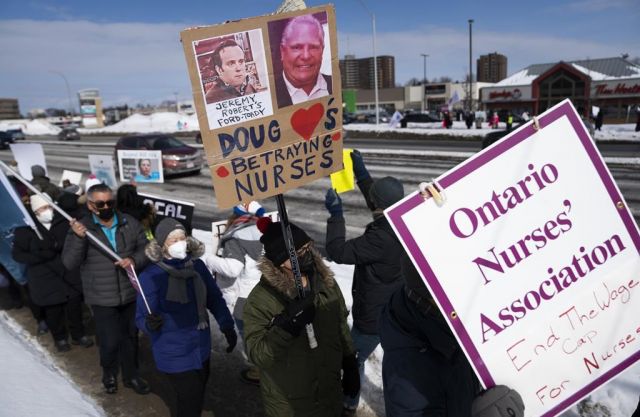 Photo: The Canadian Press
Nurses and their supporters protest Premier Doug Ford and Ontario's Bill 124 on the sidewalk in front of the constituency office of PC MPP for Ottawa West-Nepean Jeremy Roberts in Ottawa, on Friday, March 4, 2022. An Ontario court has struck down a bill that limited wages for public sector workers.  THE CANADIAN PRESS/Justin Tang

An Ontario court has struck down a law that limited wages for public sector workers, who hailed the decision as a "historic victory" while the province said it plans to appeal the ruling.

Groups representing several hundred thousand public sector employees challenged the constitutionality of Bill 124, a law passed in 2019 that capped wage increases at one per cent per year for Ontario Public Service employees as well as broader public sector workers.

Health-care workers have long called for Bill 124 to be repealed. Unions and doctors have said the bill has contributed to the health-care crises in Ontario, which has seen droves of nurses and personal support workers recently leave the profession after two difficult pandemic years.

The province argued the law did not infringe constitutional rights, saying the charter only protects the process of bargaining, not the outcome. The Progressive Conservatives had said it was a time-limited approach for three years to help eliminate the deficit.

In the decision released Tuesday, Justice Markus Koehnen said the law infringes on the applicants' rights to freedom of association and collective bargaining.

"The Charter protects not just the right to associate but also the right to a meaningful process in which unions can put on the table those issues that are of concern to workers and have them discussed in good faith," Koehnen said.

"Legislation that takes issues off the table interferes with collective bargaining."

A spokesperson for the Attorney General said the province is reviewing the decision.

"Our intention is to appeal," said Andrew Kennedy.

The case sat for two weeks in September.

Court heard the law affects about 780,000 workers in the province. It does not apply to municipalities, First Nations and Indigenous communities, and for-profit companies.

The province had argued it was under severe financial strain when it implemented the new law.

But the judge disagreed.

"On my view of the evidence, Ontario was not facing a situation in 2019 that justified an infringement of Charter rights," Koehnen said.

"In addition, unlike other cases that have upheld wage restraint legislation, Bill 124 sets the wage cap at a rate below that which employees were obtaining in free collective bargaining negotiations."

The judge said the province was free to take a position in negotiations that it could not pay more than a one per cent wage increase.

"It appears that Ontario was reluctant to take that position because it could lead to strikes," Koehnen wrote.

"As noted, the right to strike is constitutionally protected."

The judge said that position does not amount to a reasonable limit on the right to collective bargaining in a free and democratic society.

"Although inconvenient, the right to strike is a component of a free and democratic society," Koehnen wrote.

"Strikes bring issues to the public forefront and allow their resolution to be influenced by public opinion."

The Ontario Nurses' Association will be looking to reopen the contracts affected by Bill 124, its interim president Bernie Robinson said.

"The wage suppression has demoralized our nurses and health-care professionals," she said in an interview.

"It's made Ontario's nursing crisis even worse, and these skilled and vital workers have left their jobs, they've left to find better opportunities or left the profession entirely and that is honestly a shame."

A lawyer for one of the teachers' unions called the decision a "historic victory."

"The decision is a significant rejection of the government’s policies which sought to pursue its economic agenda on the backs of workers," said Paul Cavalluzzo, who represented the Ontario English Catholic Teachers' Association in the case.

A lawyer for the Ontario Federation of Labour and broader public sector workers said the decision is a "complete vindication" for unions.

"The reasons also thoroughly debunk the government’s argument that the wage controls were in any way justified, particularly in view of the various tax cuts implemented by the Ontario government, the absence of any fiscal crisis, and the serious impact on workers of the one per cent wage controls, including in the face of significantly higher inflation and widespread recruitment and retention challenges," said Steven Barrett.

Karen Littlewood, the president of the Ontario Secondary School Teachers' Federation, said she is pleased the court determined the law was an overreach.

"We knew when we launched this challenge against Bill 124 that it was the right thing to do, that workers' rights were being taken away, that the majority of education workers who are women were being unfairly attacked," she said.

Teachers are currently in talks for new contracts with the government and Littlewood said she hopes this round sees free and fair collective bargaining.

All opposition parties called for the provincial government to let the decision stand and not appeal it.

"It's affected our relationship with our front-line health-care workers and nurses and has been very damaging at a time when we need those people more thane ever," said interim Liberal Leader John Fraser.

In September, the Financial Accountability Office of Ontario said the law was set to save the province $9.7 billion.

The financial watchdog said overturning it would cost the province $8.4 billion over five years, including a potential $2.1 billion in retroactive payment to the majority of workers already affected by Bill 124.

Contracts for about 30 per cent of public workers have not yet entered a three-year period of being affected by the bill.

The teachers' unions won a similar court challenge several years ago against the Liberal government. Legislation known as Bill 115 froze some of their wages and limited their ability to strike, and the judge ruled that the government "substantially interfered with meaningful collective bargaining."

Ontario was left having to pay more than $100 million in remedies to the unions.

The judge has deferred the issue of a remedy to to a future hearing.

The province has 30 days to file its appeal.