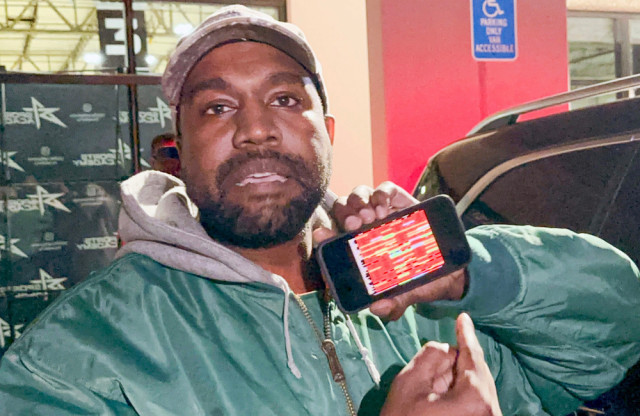 Kanye West is convinced fellow celebrities haven't spoken out in his defence because they are "controlled" by secret masters.

The rapper has given a baffling new interview in which he suggests his lack of star support throughout a series of controversies in recent months is down to a secret network which is in charge of celebrities - and he uses the recent case of Balenciaga's teddy bear advertising campaign - which featured children holding bondage-styled cuddly toy bags - as an example.

However, Kanye's estranged wife Kim Kardashian is among the stars who have spoken out against the Balenciaga campaign and even suggested she's re-evaluating her partnership with the brand over the images, which were taken down as the company issued an apology.

In a post on Twitter.com, Kim wrote: "As a mother of four, I have been shaken by the disturbing images. The safety of children must be held with the highest regard and any attempts to normalise child abuse of any kind should have no place in our society — period."

She went on to add: "I appreciate Balenciaga’s removal of the campaigns and apology. In speaking with them, I believe they understand the seriousness of the issue and will take the necessary measures for this to never happen again."

Kanye has been involved in his own controversies in recent months which have included outrage over his decision to promote 'White Lives Matter' T-shirts at his Paris Fashion Week show as well as a number of anti-semitic outbursts online which led to him being booted from Twitter and Instagram.