Kamloops was unable to complete a comeback, falling 3-2 to Moose Jaw Friday

The Kamloops Blazers did everything but find the game tying goal Friday night.

Trailing the visiting Moose Jaw Warriors 3-0 after 40 minutes, the Blazers crept to within a goal, but couldn't manage to find the equalizer in a 3-2 defeat.

Brayden Yager with the teams at even strength beat Michael Schnattinger later in the second to send the Warriors to the dressing room nursing a 3-0 lead.

The Blazers came out flying in the third and were rewarded just 43 seconds in when Logan Stankoven, parked below the left circle, took a backdoor feed from Dylan Kuefler and sent a one-timer past Connor Unger.

Stankoven dropped a pass to Kuefler, whose initial shot from the right faceoff circle was stopped by Unger. Kuefler followed up on his own rebound and, with his momentum carrying him behind the net reached out front and tucked the puck inside the near post.

The Blazers threw 14 shots at Unger during the final 20 minutes but were unable to find the equalizer.

Unger stopped 36 shots fired his way as the Blazers outshot the visitors 38-29.

The Blazers head north to face the BC Division-leading Prince George Cougars Saturday before hosting Connor Bedard and the Regina Pats Wednesday.

Only about two dozen tickets remain for that game.

Photo: Steve Dunsmoor/file
Dylan Wightman got the Rockets on the board Friday in Everett.

The Kelowna Rockets are heading home with a split of their two-game road trip south of the border.

Colton Dach snapped a 2-2 tie late in the second period Friday, leading the Rockets to a 4-2 victory over the Everett Silvertips.

Jackson DeSouza started the play, hitting Dach with a long stretch pass from deep in his own end.

Dach drifted toward the slot from the left wing and sent a shot from the top of the circle that appeared to deflect off an Everett defenceman and past goaltender Braden Holt.

Former Silvertip Max Graham hit the empty net in the dying seconds to seal the victory.

Everett took a 1-0 lead into the second period, but goals three minutes apart from Dylan Wightman and Nolan Flamand put the Rockets up a goal.

While enjoying a man advantage, the Rockets broke out on the rush. Andrew Cristall's initial shot was stopped, but Wightman, trailing the play, backhanded the rebound under Holt for the tying goal.

Three minutes later, Adam Kydd spotted Flamand alone in the slot. His one-timer beat Holt for his fourth of the season.

Cristall, who had his eight-game point streak snapped in Seattle, picked up a pair of assists in Everett.

DeSouza, on a goal scoring tear of late, also had a pair of assists, giving him eight points over the last six games.

They'll entertain Connor Bedard and the Regina Pats Tuesday in a game that is already completely sold out.


Fans coming out in droves to see hockey's next big superstar 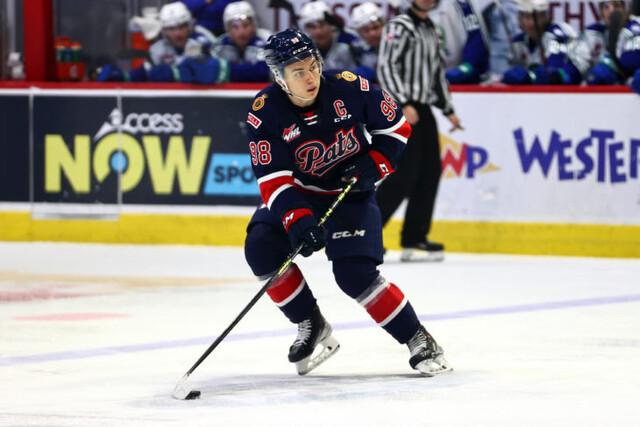 Kyle Crnkovic snapped a 2-2 tie midway through the second the Reid Schaefer found the empty net late in regulation time leading the Seattle Thunderbirds to a 4-2 home ice victory over the Rockets Wednesday night.

The T-Birds held leads of 1-0 and 2-1, only to see the Rockets come back to tie it on each occasion.

However, the Rockets were unable to find the equalizer a third time.

Trailing 1-0 during the opening moment of the game, Adam Kydd stole the puck along the side boards in the Seattle zone.

He played give-and-go with Gabriel Szturc before burying his own rebound, notching his 11th of the campaign.

After Jared Davidson restored the one goal lead early in the second, Jackson DeSouza went to work.

The stay-at-home defenceman who had just one goal in his first 84 games notched his third in two games to tie it.

After Szturc won a faceoff in the Seattle end, the puck came back to DeSouza whose wrist shot from the mid point seemed to handcuff Scott Ratzlaff in the T-Birds net.

Less than two minutes later, Crnkovic beat Talyn Boyko with what ;proved to be the game winner.

Andrew Cristall was held off the scoresheet Wednesday as his eight-game point streak came to an end.

The Rockets will travel up I-95 for a date with the Everett Silvertips Friday before returning home to host the Moose Jaw Warriors Saturday.