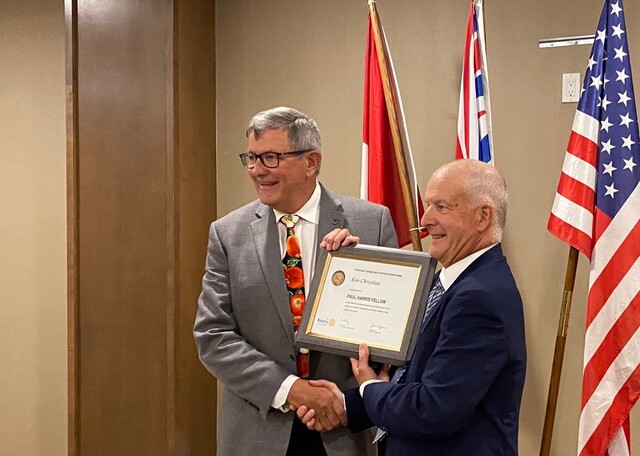 Photo: Kristen Holliday
Mayor Ken Christian is presented with the Rotary Club's Paul Harris Fellow Award in honour of his longstanding service to the community.

Kamloops Mayor Ken Christian has been recognized with an award from the Rotary Club of Kamloops West for service to the community.

At a Rotary meeting on Thursday, Christian was honoured with the Paul Harris Fellow Award which recognizes his longstanding commitment, dedication and service to the city.

“Paul Harris was the founder of Rotary International in 1905,” the club said in a statement.

“The Paul Harris Fellow award is one of great honour to our founding father and is given with great pride to those that have provided outstanding service.”

Christian provided some remarks to those in attendance, reflecting on highlights and difficulties during his time in the mayor’s chair. Christian also gave kudos to Rotarians for their consistent service to the community.

“You’re everywhere. And if it wasn't for that kind of contribution, which to me, epitomizes the values that Kamloops sounds for, I think we would be much worse in the city, but you keep on volunteering, and you do so consistently,” Christian said.

Christian served for 18 years as a school trustee on the Kamloops-Thompson Board of Education, and served as a Kamloops city councillor for two terms before being elected mayor in 2017.