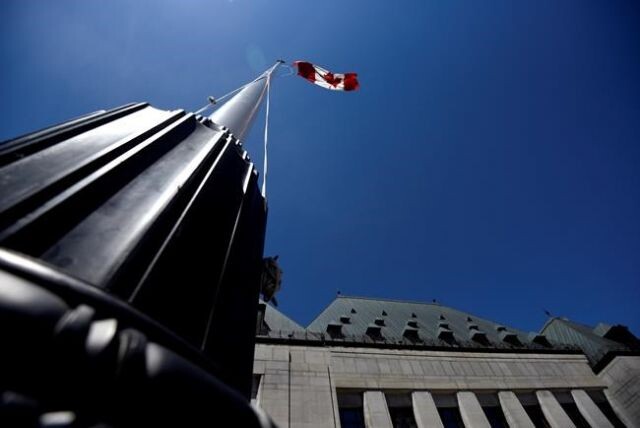 Photo: The Canadian Press
The flag flies in front of the Supreme Court of Canada in Ottawa, on Thursday, June 17, 2021.

Two men convicted in the 2007 Surrey Six mass murder were before the Supreme Court of Canada Tuesday as the justices heard a prosecution appeal of a B.C. appeal court decision.

At trial in B.C. Supreme Court, Cody Haevischer and Matthew Johnston were found guilty for their part in the murder of six men inside a Surrey apartment building.

That conviction was in 2014 but the pair appealed in October 2020. In January 2021, the B.C. Court of Appeal upheld the guilty verdicts and denied a request for a new trial.

But, it also quashed the convictions and allowed the men a hearing to argue for a stay of proceedings due to an abuse of process.

B.C. prosecutors are appealing that.

“The six victims were shot in the back of the head as they lay defenceless, face down on the floor,” documents filed in the Ottawa court said.

The Crown said the trial judge had acknowledged police misconduct in the case but noted a stay of proceedings would have been disproportionate given the gravity of the charges.

Haevischer and Johnston’s lawyers, however, argue they should be allowed to proceed with their stay applications given the behaviour of police and prison authorities.

Johnston’s court filings said police officers exploited the trust of key protected female witnesses in order to have sex with them — including girlfriends of the men they ultimately charged.

“The officers endangered the safety of these young women, lied to their superiors, and manipulated overtime and expense claims to cover up their alcohol-fuelled revelry,” the filing said.

Further, it alleges police directed prison authorities to subject the men “to conditions of confinement akin to torture for more than a year — including an always-lit cell smeared with mucous, feces and blood — isolating them from meaningful human contact and limiting their access to counsel. The conditions were characterized by the trial judge as cruel and unusual punishment.”

Red Scorpions gang leader Jamie Bacon pleaded guilty to his role in the killings where his associates went to the apartments for Bacon's drug-dealing rival, Corey Lal.

And, another person, known as Person X in court files, pleaded guilty in April 2009 to the second-degree murders of three of the victims and to conspiracy to commit murder.

It was Lal, his brother, two of his gang associates and the two bystanders with gangland connections that died in the gunfire.

Bystanders, Christopher Mohan, 22, happened to walk out of his apartment when the hitmen were standing there. Mohan was dragged into Lal's apartment and executed with the rest.

Gasfitter Edward Schellenberg happened to be there on a service call.

There is no indication when the high court may rule in the case.