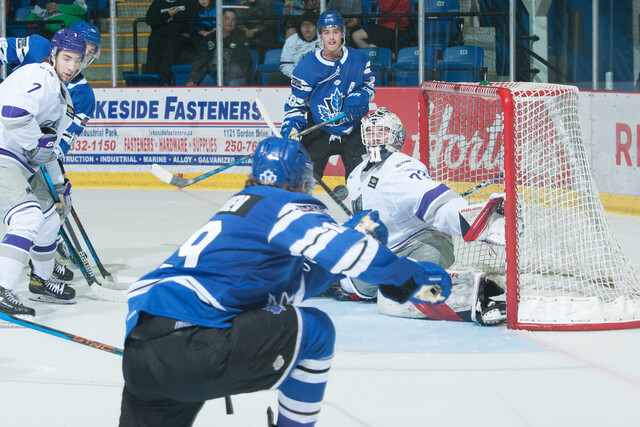 The Penticton Vees capped off a perfect September with a 6-1 victory over the Salmon Arm Silverbacks Friday at the Shaw Centre.

The scoring began a minute and a half into the second period, on a Vees’ power play when Billy Norcross followed up on Callum Arnott’s rebound and took it into an open net to make it 1-0.

Salmon Arm’s lone goal was earned on a power play as well, when Isaac Lambert tied the game up nine minutes into the middle period as he snuck the puck under Goaltender Luca Di Pasquo’s pad to make it 1-1.

Josh Nadeau put the Vees back ahead a few minutes later, scoring on a one-timer from the circle after his brother Bradly set up the play from behind the net.

With just two minutes left in the second, Jackson Nieuwendyk then put the visitors ahead 3-1 when he beat Silverbacks’ starter Matthew Tovell on the stick side after a cross-ice pass from Brett Moravec.

Bradly Nadeau added to the Vees’ lead 64-seconds into the third period to make it 4-1. Then, Penticton scored twice in 68-seconds to put the game out of reach.

Moravec made it 5-1 when he scored after the puck rebounded off the goalie’s pad and right onto his blade. Suniev extended the Vees lead to 6-1 on the next shift, as he popped the puck in after Josh Nadeau did a lap of the net and took it off at the back post.

Two undefeated teams go head-to-head in West Kelowna on Saturday, as the Vees pay a visit to the Warriors at Royal LePage Place with a puck drop at 7 p.m. Fans can listen to the game on Bounce 800 AM and watch on Hockey TV.