West Kelowna outslugged Wenatchee 7-4 in their home opener before 1,284 fans

Warriors hang on in opener 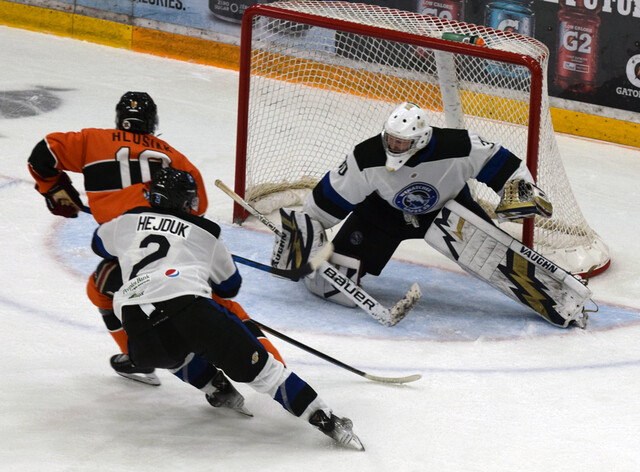 Photo: Wayne Moore
Rylee Hlusiak scored on a breakaway to put the Warriors up for good

Special teams proved to be the difference Friday as the West Kelowna Warriors kicked off their home schedule with a thrilling 7-4 win over the visiting Wenatchee Wild.

The Warriors scored five times with the man advantage while holding the Wild off the scoresheet on their four opportunities, including two critical kills with the game hanging in the balance early in the third period.

West Kelowna held a commanding 5-2 lead after 40 minutes, but the Wild pressured the Warriors out of the gate in the third and, after two goals from Jonathan Horn in the first two-and-a-half minutes, cut the deficit to one.

But Justin Katz came up big with two key stops on a power play moments later, and the penalty killers, led by Dylan Brooks blocked a number of shots to preserve the one-goal lead.

"All our D in general I thought did real good. I think there was one sitting on the back post when it was 5-4 that could have been the difference in the game," said head coach Simon Ferguson.

"The D did a real good job tonight in that respect. I thought we needed to move the puck a little bit more, a little bit quicker and got way too loose when we got up."

The success of the penalty killers allowed the Warriors to find their legs later in the period, and it paid off with a pair of power play goals to seal it.

Jaiden Moriello got his second of the night when a centering pass deflected off his skate past Wenatchee netminder Owen Millward.

Moments later, Matthew Fusco blasted home his third of the campaign from the point to close out the scoring.

"It's one of the things we knew when we got him is he finds a way to get it through.

"It's a hard shot, even the rolling puck he managed to get on net. When you keep it simple and you shoot, you get good bounces."

The Warriors led 1-0 through the first half of Friday's game as both Katz and Millward were called upon to make some key saves to keep the score low.

Katz somehow got his stick on a back-door play on a Wenatchee power play, while Millward was sharp stopping Jake Bernadet on a Warriors breakaway.

But, as soon as Gabe Dombrowski threaded a seeing-eye shot past Katz from the right boards to tie it, the flood gates opened.

The teams combined for six goals in four-minutes and 27 seconds, including four from the Warriors.

Moriello jammed home his first to put the Warriors up 2-1, then Riley Hlusiak on a breakaway made it 3-2 before back-to-back power play goals 34 seconds apart from Isaiah Norlin and Michael Salandra from almost the identical spot in the left circle put the Warriors up three after 40.

Alexi Van Houtte-Cachero with a power play goal in the first also scored for the Warriors.

Norlin had two assists to go along with his goal. Luke Devlin and Nolan Hayes also chipped in with a pair of assists.

All the Wild scoring came from the line of Horn, Dombrowski and Christian Kim. Horn had two goals and a pair of helpers, Kim a goal and three assists while Dombrowski added a goal and two assists.

It wasn't a classic, but Ferguson gave credit to the guys for not breaking under the third period pressure.

"It's early season hockey. We had moments where we did some really good things, and there were moments when we didn't do anything good.

"When you find a way to win like that you learn something hopefully. I think our guys need to learn when you're up in this league, you're never up.

"They made a pretty big push on us, Katz was able to hold strong, and we found a way to find the net."

The warriors finished the night five for nine with the man advantage.

Katz turned away 27 shots to earn his third straight win this season.

The Warriors are back at it Saturday night when they entertain the Penticton Vees at Royal LePage Place.

It will be a special night as the team honours the memory of former Warrior Parm Dhaliwal who tragically passed away in the summer.