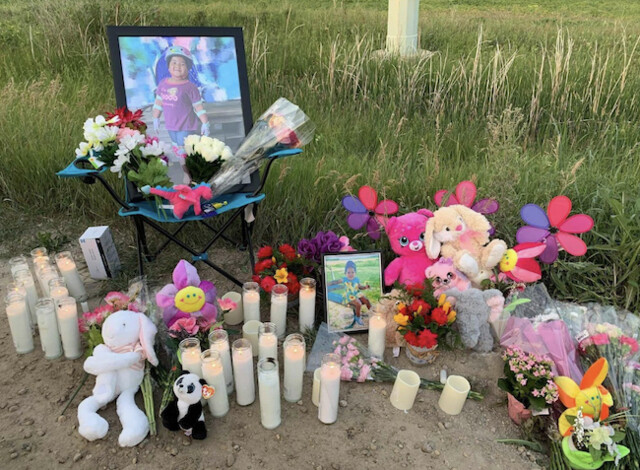 Photo: The Canadian Press
Photos of Jemimah Bunadalian, 3, sit near candles during a vigil for the Winnipeg girl on July 10, 2021, in this handout photo provided May 26, 2022. The family of the three-year-old who was fatally stabbed by her father is asking a Winnipeg judge to apply the longest possible sentence for the man.

A Winnipeg man who pleaded guilty to second-degree murder in the stabbing death of his young daughter has been sentenced to life in prison with no chance of parole for 18 years.

Relatives shared stories of her love-filled life before the sentence was handed down Thursday in Winnipeg Court of King's Bench.

Albert Bunadalian, the girl's grandfather, told the court that he relives the events that led to her death every day.

"Every night when I go to sleep, I have a nightmare. Every day I wake up, my heart shatters," Bunadalian said as his voice wavered.

"My granddaughter was our life. All our lives, she gave us joy, happiness and much love."

Two large photos of the toddler were displayed in the courtroom during the sentencing hearing.

Wearing a white T-shirt with a photo of the girl, Bunadalian told Justice Joan McKelvey the death of his granddaughter was the worst day of his life.

The toddler was remembered as smart beyond her years. Both parents are deaf and she learned the American Sign Language alphabet at an early age.

"Because of what you did, we will never see (Jemimah) grow and witness all her potential."

McKelvey said the events that occurred were both horrific and tragic.

"There is no sentence that will … heal the loss."

Nausigimana will also have to comply with a mandatory DNA order, weapons prohibition and cannot contact the mother and her parents.

McKelvey said the act of a parent killing their child is "highly egregious" and must be strongly denounced and deterred.

Court heard that Nausigimana made a plan a week before the attack to physically hurt the mother after months of not being able to see his daughter because of the custody dispute.

Crown attorney Jennifer Mann told court the girl's death was spurred by a "tragic case of domestic violence that ended with the vicious murder of a child."

Mann said that Nausigimana set out to harm Jemimah's mother that day to punish her for keeping his daughter from him.

"He had intentions of killing or maiming his ex-partner," she said.

An agreed statement of facts read into court said Nausigimana approached the mother's vehicle outside his daughter's daycare in Winnipeg last July.

It said Nausigimana had a knife, forced himself into the car and directed the mother to drive to a deserted area.

The woman became distraught and he told her to switch seats. She used the opportunity to run away. Court heard she didn't believe her ex-partner would harm their daughter.

Shortly after, Nausigimana stabbed his daughter twice. He then stopped a car passing by and told the driver to call 911 because he had just killed his daughter.

In a victim impact statement read by Mann, Jasmine Bunadalian recalled memories of her daughter's love of the beach and her affectionate hugs. The mother watched the hearing online.

"There are no more hugs from her," Bunadalian wrote. "It makes me feel sad and awful. That is what I feel every day."

Nausigimana apologized Thursday for his actions.

"I do know I did wrong. I sinned against God … I was out of control," he said through an American Sign Language interpreter.

McKelvey acknowledged Nausigimana expressed regret and shame, but said some of his comments before and during sentencing showed he has an attitude of, "overall justification and victim blaming."

Nausigimana was previously convicted of a 2017 assault against the mother when she was pregnant. Court heard that he had tried to force an abortion by making her drink a mixture of salt, water and vodka against her will.

The mother was granted a protection order that same year, but not long after, she requested it be revoked.

Nausigimana was sentenced to one year of supervised probation for the assault.

During that hearing, court was told he came to Canada as a refugee from Burundi when he was a teen. He lost his hearing when he had meningitis as a child.

Nausigimana's mother moved to Ottawa and left him in foster care in Winnipeg. He remained in care until he was 21.

Marilou Bunadalian told court the family's home used to be filled with laughter and excitement but since her granddaughter's death, that has been replaced with sadness and grief.

"This has been the most painful and horrifying incident in our family," she wrote in a statement read by the Crown.