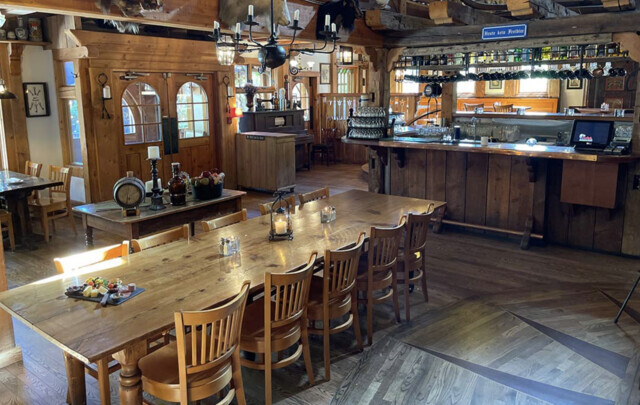 Just like that. Peachland’s Gasthaus on the Lake is fully booked for the week.

Manager Andrew Neville says they have seen overwhelming support since announcing they are reopening tonight.

“Nine months, it was a difficult time for all our staff and everybody. And now with us reopening this week, we're just trying to take it easy,” he said, explaining their soft open and limited hours.

“Everyone's a little bit rusty, and we're running with, like everyone else, a staff shortage.”

“Unfortunately, for the rest of this week, we reached capacity and next week, we're going to start all over again on Wednesday.”

The restaurant is accepting reservations online and will be open Wednesday to Sunday, 4 p.m. to 7 p.m.

“We've just been inundated,” Neville said. “And I noticed a couple of people mentioned that even the reservation system was crashing on them.”

Gasthaus is hoping to expand their operating hours as they bring on more staff. For now, reservations are required.

Nine months of repairs, and a false restart later, Peachland’s iconic Gasthaus on the Lake restaurant will reopen today.

The Bavarian-themed restaurant announced online it will reopen initially with limited hours.

“We are having to implement a limited number of online reservations only policy for the time being,” the business said online.

“We are limiting the size of groups to eight persons. As this may seem very restrictive, we are in the unfortunate situation of just not having a large enough team to accommodate everyone at this time. The hope for the near future is that we will be able to return to regular business practices.”

Gasthaus has been closed since Dec. 27, 2021, when a pipe burst and caused significant water damage to the building.

The restoration was then delayed by the presence of asbestos in the late 1940s-constructed log cabin building that makes up part of the restaurant. The entire restaurant needed a full decontamination and repairs and restoration could not fully begin until the end of April.