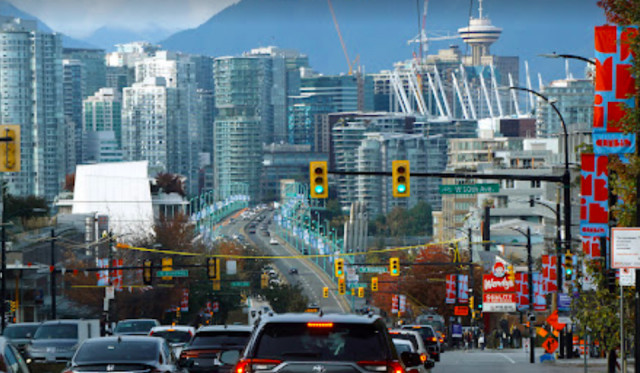 Photo: Photo via Google Maps.
Stop Fracking Around will block the Vancouver, B.C. bridge and also head to CBC headquarters. They poured molasses on the Gastown Steam Clock previously.

Demonstrators plan to block traffic on a major Vancouver bridge and on some city streets Monday (Aug. 15).

Stop Fracking Around, a new civil disobedience group, launched its anti-fracking campaign in Vancouver on Wednesday morning just after 10 a.m., pouring molasses over the Gastown Steam Clock at the corner of Cambie and Water streets.

The group said the thick syrup represented "fracked oil" and expected the demonstration would "possibly involve arrests" for its "non-violent civil disobedience."

Now, activist Brent Eichler, formerly of Extinction Rebellion's Vancouver chapter and the Save Old Growth campaigns, tells Vancouver Is Awesome that the group has another, bigger rally planned for Monday.

The environmental group will be joined by Wet'suwet'en hereditary chiefs at Vancouver City Hall at 10 a.m. After that, they will march down to the Cambie Street Bridge, where they plan to disrupt traffic. Finally, the demonstrators will make their way to the Canadian Broadcasting Corporation (CBC) Vancouver headquarters located at 700 Hamilton St.

"That's what we need to do at this time," Eichler said, noting that many of the group members have already been arrested multiple times and some of them, including himself, are on probation; other members are currently serving jail time.

While some of the protesters are Extinction Rebellion members or were part of the Save Old Growth campaign, Eichler underscored that this is a "brand new group" that is specifically trying to get the Canadian government to end fracking, including the "immediate cancellation" of the Coastal GasLink pipeline.

Monday's demonstration will commence at city hall because one of the group's primary demands is "to the municipal level," he adds. Specifically, they demand that no building in Vancouver will be heated by fracked gas by 2025.

On Wednesday, Stop Fracking Around demonstrator Sofie Papp was arrested and charged with mischief under $5,000 for pouring molasses on the steam clock, according to group member Deraek Menard.

"It was a symbolic act to try to bring attention to the climate crisis," he says, adding it was a reference to the "doomsday clock," a symbol that represents how close humanity is to destroying the world.

"We are at a hundred seconds [to midnight]... That's extremely alarming," he says. "The amount of concern pales in comparison to the fervour we saw when we had the Cuban Missile Crisis or the Cold War."

Vancouver was included in the top 20 cities in the world at risk of climate change and sea level rise in a recent report. "It's very possible in the coming decades that we could not have an airport," Eichler adds.

David Suzuki told V.I.A. in a previous interview that he understands why groups such as Extinction Rebellion engage in civil disobedience, adding that humanity is on a "suicidal path."

V.I.A. has reached out to the VPD for comment.