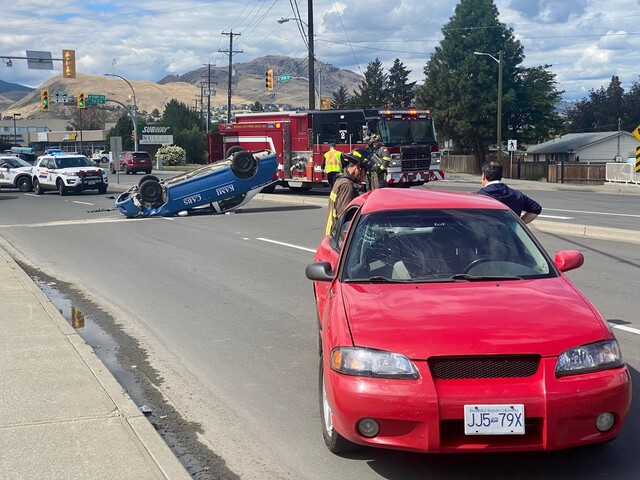 Photo: Tim Petruk
This was the scene on Fortune Drive near Sydney Avenue on Friday. Police later said a Kami Cabs taxi was stolen prior to the collision.

The suspect in an alleged “brazen” car-jacking last week that ended with a taxi on its roof on a major North Shore thoroughfare in Kamloops is now facing four charges.

Emergency crews were called to a stretch of Fortune Drive just south of Sydney Avenue, near Northhills Mall, just before 3 p.m. on Friday for a report of a collision. A Kami Cabs taxi could be seen on its roof, with a damaged red sedan about 30 feet away.

According to police, a man armed with a weapon robbed a cab driver and stole his vehicle. Investigators believe the stolen taxi collided with two civilian vehicles before rolling over.

Mounties said the suspect fled on foot and was arrested a short time later.

Bradley James Venn, 19, is facing one count each of robbery, flight from police, dangerous driving and failure to stop at the scene of an accident.

Venn is slated to appear in Kamloops provincial court on Thursday for a bail hearing. He remains in custody.