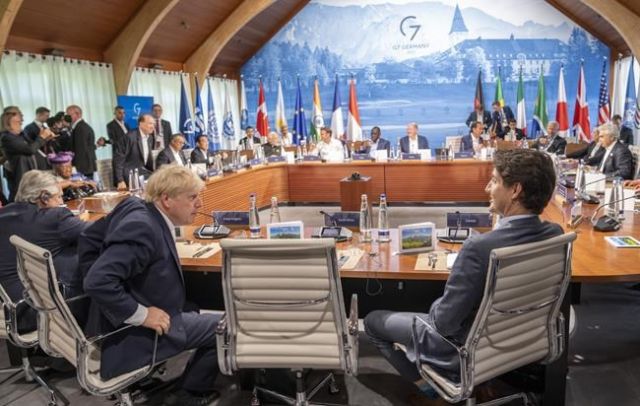 Canada is looking at developing new infrastructure to help other countries transition away from Russian oil and coal, Prime Minister Justin Trudeau said Tuesday at the conclusion of the G7 summit in Germany focused on the conflict in Ukraine.

In their final communique for the meeting, the G7 leaders said they are working to make sure Russia does not exploit its position as an energy producer to profit from its aggression at the expense of vulnerable countries.

The conflict has squeezed energy markets in Europe and the security of the supply around the world.

Over the course of the three-day summit, the leaders agreed to consider a cap on the price of crude oil and petroleum from Russia, and even a comprehensive ban on Russian oil and coal.

"Canada obviously as an oil and gas producer is ensuring that in the short term we're doing what we can to alleviate pressures," Trudeau said at a news conference at the close of the summit.

"We're also looking medium term at expanding some infrastructure, but in a way that hits that medium -term and -long-term goal of accelerating transition, not just off Russian oil and gas, but off of all our dependence on fossil fuels."

The leaders agreed compromising on climate and biodiversity goals was not on the table to address the growing energy crisis.

The idea to ban Russian oil is still only in discussions, and would need to be implemented careful to mitigate the potential fallout for vulnerable countries that rely on Russia for power.

Trudeau said Canada remains determined to support Ukraine as it defends its sovereignty and territorial integrity.

"It's important that the world doesn't lose its attention and focus over what's happening in Ukraine, we must and we will remain committed until Ukraine and democracy prevail," Trudeau told a news conference.

He announced more money for Ukraine on Tuesday, including a $200-million loan through the International Monetary Fund.

In addition to the loan to the Ukrainian government, Canada is giving $75 million in humanitarian assistance to help with operations in Ukraine and in the neighbouring countries. The aid will include the provision of in-kind food assistance, emergency cash and vouchers, protection, shelter and health services.

Earlier in the summit, Trudeau announced $52 million in agricultural aid including mobile grain storage equipment to increase grain storage capacity as well as help to provide speedy diagnostic testing and monitoring of animal diseases to allow for export certification.

"Our farmers typically face big challenges and have been proven to be inventive and creative. So we'll bring this expertise to Ukraine to help as much as we can," Trudeau said.

Canada is also contributing $15 million to help fund demining efforts and $9.7 million for those tracking human rights violations in Ukraine.

The leaders have also agreed to intensify their efforts to mitigate rising food prices and scarcity, which have been exacerbated as a result of Russia’s war in Ukraine.

They plan to expand their resettlement programs to accommodate the millions of Ukrainian refugees who have been displaced by the conflict.