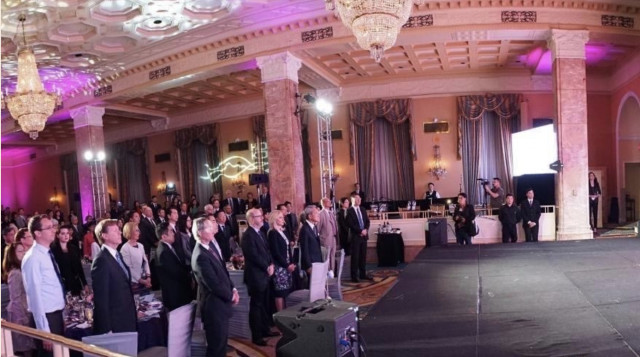 A small group of protesters gathered in downtown Vancouver June 23 to denounce a celebration of the 25th anniversary of the Hong Kong Special Administrative Region.

Outside, a small group of protesters held signs denouncing the Chinese Communist Party for its erosion of the city’s democratic institutions and autonomy that should otherwise be upheld under a “one country, two systems” arrangement until 2047.

Fenella Sung of Vancouverites Concerned about Hong Kong said Brodie, in particular, was offside for celebrating with representatives of an authoritarian regime that is facing multiple international outcries for human rights abuses.

“Given the huge influence of Hong Kong immigrants, or those who came by way of the Hong Kong pathway, seeking refuge here in Canada to start a new life in the past two or three years, I think we cannot allow ourselves to just be so naive, or just be so wilfully blind to just look at the invitation as no harm and it's just standard practice,” said Sung.

Brodie did not respond to Glacier Media for comment, although following similar past events — such as his attendance at a celebration of Mao Zedong — he has expressed he is representing the Chinese community of Richmond.

Sung said the Chinese government does not represent Chinese people and culture.

“We have to distinguish whether the invitation is from the foreign government level or from a community group,” said Sung.

“I would say the celebration of the handover, at this particular point in time, in Canada, it cannot be called or seen as an equivalent of a multicultural event representing the Hong Kong or Chinese community in Richmond,” said Sung.

Sung said it may be polite to accept an invitation but it sends the wrong message.

The issue of foreign influence and interference is active in Richmond after the September 2021 federal election saw accusations of pro-Beijing messaging and misinformation against then-Steveston-Richmond East Conservative MP Kenny Chiu, who lost.

Canadian Security and Intelligence Services director David Vigneault said May 4 at a speech at the University of B.C. he has been briefing local government officials on foreign interference.

“Elected and public officials across all levels of government, representing all political parties, staff, and public servants are also potential targets of foreign interference. Virtually anyone with input into or influence over the public policy decision-making process — is an attractive target for those looking to advance their interests covertly,” said Vigneault.