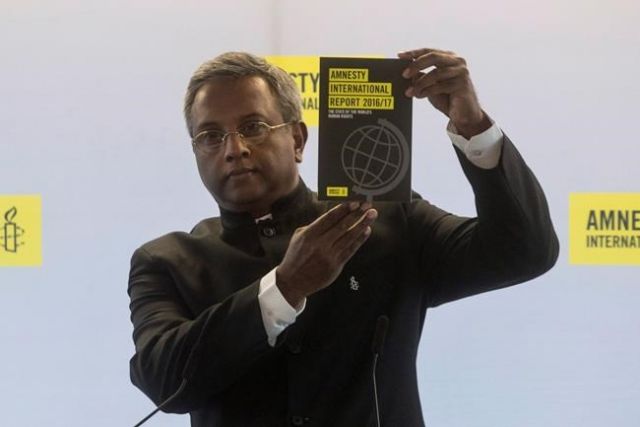 Releasing its 408-page annual report on rights abuses around the world Wednesday, the watchdog group described 2016 as "the year when the cynical use of 'us vs. them' narratives of blame, hate and fear took on a global prominence to a level not seen since the 1930s," when Adolf Hitler rose to power in Germany.

"The limits of what is acceptable have shifted. Politicians are shamelessly and actively legitimizing all sorts of hateful rhetoric and policies based on people's identity: misogyny, racism and homophobia. The first target has been refugees and, if this continues in 2017, others will be in the crosshairs."

The White House did not respond to a request for comment on the report.

Amnesty's annual report, "The State of the World's Human Rights," documented what it called "grave violations of human rights" in 159 countries in 2016.

It said governments "turned a blind eye to war crimes, pushed through deals that undermine the right to claim asylum, passed laws that violate free expression, incited murder of people simply because they are accused of using drugs, justified torture and mass surveillance, and extended draconian police powers."

The report added that "the big question in 2017 will be how far the world lets atrocities go before doing something about them."