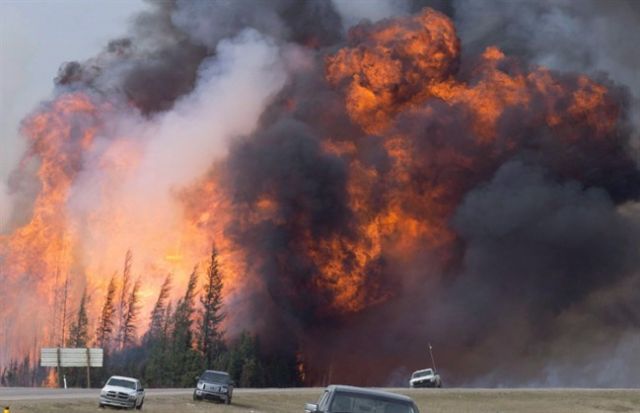 A mandatory evacuation of employees at work camps north of Fort McMurray, Alta., has expanded and now affects about 8,000 people.

The Rural Municipality of Wood Buffalo issued an emergency alert about 10 p.m. on Monday evening, saying the move was prompted by the threat of a quickly spreading wildfire.

The evacuation zone now stretches about 50 kilometres north of Fort McMurray to just south of Fort MacKay, and includes Syncrude and Suncor facilities, along with several smaller operations.

The alert instructs all camps and production facilities to evacuate immediately, and for all evacuees to head south on Highway 63 "if possible."

About 4,000 workers from camps north of Fort McMurray are being ordered to evacuate because of an approaching wildfire.

The Rural Municipality of Wood Buffalo calls it a "controlled precautionary evacuation" of 12 camps up to 26 kilometres north of the northern Alberta city.

The rural municipality says the fire is moving 30 to 40 metres per minute and is expected to burn six kilometres in two hours.

"This controlled, precautionary evacuation is an example of why it is not safe to be in the Regional Municipality of Wood Buffalo at this time," the municipality said late Monday afternoon in a news release.

Workers are being told to head south on Highway 63, but companies running some of the camps said their workers were going north.

Syncrude Canada tweeted that buses are transporting workers to a safe location as part of its emergency plan.

Sneh Seetal, a spokesman for Suncor Energy, called it a "precautionary measure."

"The facilities are not at risk," she said. "However, we felt it was important to take these steps in the interest of putting people first."

"The fire we believe is about 35 kilometres away," he said. "There is a significant amount of smoke."

The entire population of Fort McMurray, more than 80,000 residents, are now entering their third week away from home. Many of the work camps were used to house evacuated residents who fled north when fire broke through into the city the afternoon of May 3.

About 2,400 structures were destroyed in Fort McMurray, but essential infrastructure, including the hospital, water treatment plant and the airport, remain intact.

Crews continued to battle hot spots on the edge of the city Monday while the first still raged out of control deeper in the forest. Hot, dry conditions were not helping firefighters.

Work camps north of Fort McMurray are being ordered to evacuate because wildfires around the city are expanding.

The Alberta government issued an emergency alert saying all workers are to head south on Highway 63.

Workers at all camps up to and including the Ruth Lake Camp, which is 26 kilometres north of Fort McMurray, are being told to leave.

It wasn't immediately clear how many camps or people are involved.

Earlier today, officials warned the air quality in the Fort McMurray area was at dangerous levels.

Alberta Premier Rachel Notley said the air quality health index is normally one to 10, with 10 being the worst, but the reading this morning was at 38.