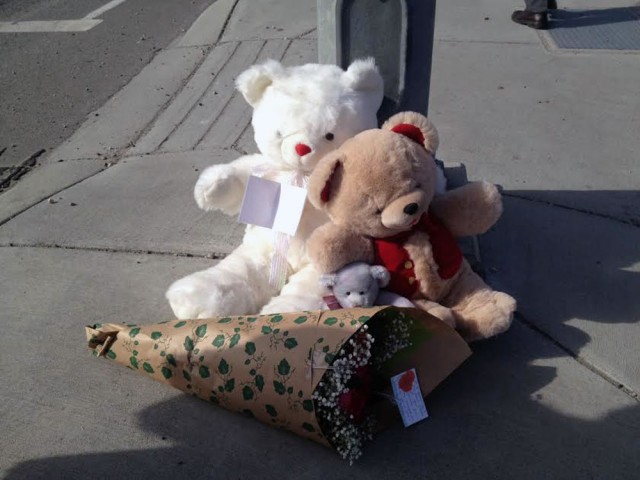 Photo: Deborah Pfeiffer - Castanet
Flowers and teddy bears were left at the scene where fiveyear-old James McIntosh was killed after being struck by a vehicle Tuesday evening.

The father of five-year-old James McIntosh spoke to media Wednesday morning, less than 24 hours after his son was struck and killed by a vehicle driven by an off-duty RCMP officer.

Brian McIntosh was at the site of the crash at Fairview Road and Highway 97, where an impromptu memorial is being erected by grieving members of the community.

McIntosh said he, his two sons and their dog were crossing the highway together when the incident occurred.

He said his son was off his bike, pushing it through the crosswalk with a green arrow.

"He hit my son, stopped and went again," said McIntosh describing the incident.

"Obviously didn't see my son. I'm yelling at him to stop...he started up again. He had no idea my son was under his tires."

"You spend all this time teaching children to be safe... (and they) can't be safe crossing on a green light."

The provincial Independent Investigations Office is investigating the incident.

Spokesman Ralph Krenz confirmed the vehicle was turning right off Green Mountain Road, going south. He also confirmed the child and father were in the crosswalk when James was hit.

Other members of the community are also feeling the loss.

At the makeshift memorial, Nadine Remington expressed her grief.

"He (James) went to school with my children at Holy Cross. They are quite a tight knit little family so understandably the whole school is reeling from this."

The school has made grief counsellors available for students and families who need support.

Holy Cross principal Shawn Campbell said it's a tough time for everybody.

"I had an opportunity to visit the parents this morning and they're crushed, as rightfully they should be," said Campbell.

"I can't imagine, as a father myself, going through what I think they are. It's a trying time for them and we wish to be of as much support as we can."

--with files from Deb Pfeiffer