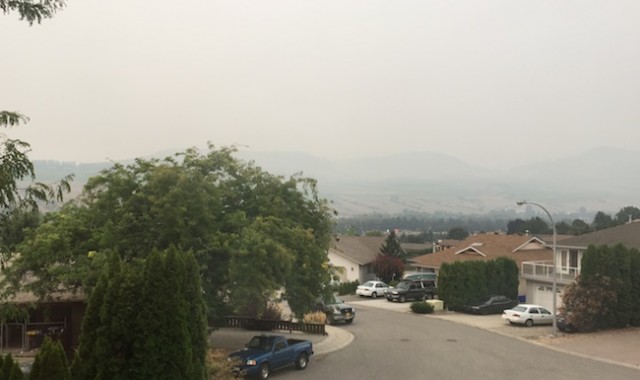 Kelowna fire dispatch wants people to know: there are no new fires burning in the Valley and – aside from the air quality – there is no imminent danger.

Dispatchers say the 911 lines have been lighting up all night and into Sunday morning with dozens of callers worried about the smoke.

A dispatcher said, on behalf of Kelowna Fire Department Platoon Capt. Tim Light: "We are getting so many calls because of the heavy smoke. People think the fire is at their back door. It's not – the smoke is coming from the Stickpin wildfire in the U.S."

The smoke drifted across the border Saturday evening, and has significantly affected air quality in the Okanagan.

For the at-risk or health-compromised population, that means reducing or rescheduling strenuous activities outdoors. Children and the elderly should also take it easy, advises Environment Canada's website.

The general population should consider reducing outdoor activities if you experience symptoms such as coughing and throat irritation.

"There are no new fires," Kelowna fire dispatch reminds.

"We've had people wondering where is the fire; people are packing, even driving around looking to see if there is a fire nearby. We're trying to reassure people there isn't a wildfire nearby, and there are no evacuations."

"That's where the smoke is from, and it's a change in the wind behaviour that has brought the smoke here."

The 911 dispatch centre reported it has been inundated with calls about the smoke.