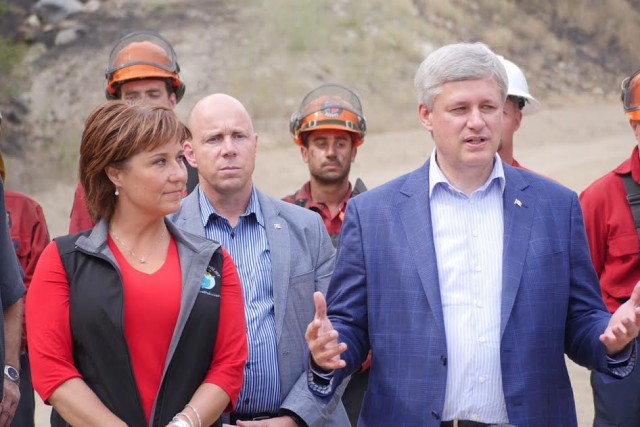 Prime Minister Stephen Harper made an ever so brief visit to the Shelter Cove fire lines Thursday afternoon.

In a controlled photo-op, the PM thanked the firefighters and first responders for their efforts on behalf of all Canadians.

He then pledged to start a federal-provincial dialogue with Premier Christy Clark and Saskatchewan Premier Brad Wall once the fire season is over.

"There has been good co-operation among governments and agencies and, certainly, the federal government always stands ready to provide additional assistance, if that is necessary."

He then turned the proceedings over to Clark.

"I want to thank the prime minister for showing the leadership to come here and express the fact Canada is behind us and supporting us during this fire season, but also when the fire season is over. To think about how we can do things differently in recognition of the fact that this is not a one summer unlike anything else that is going to happen in the future," said Clark.

"This is something I think, sadly, we are going to see happen more often."

The premier also took a moment to again thank the men and women on the front lines.

"It is unbelievable the risk these men and women get to. I have been on the front lines with some of them ... imagine walking into that burning forest with a can of gas in one hand and an axe in the other to do a prescribed burn. That's what they do every day, and they do it to protect British Columbians."

The Shelter Cove fire remains pegged at 460 hectares in size.

Approximately 70 properties along Westside Road remain under an evacuation order.