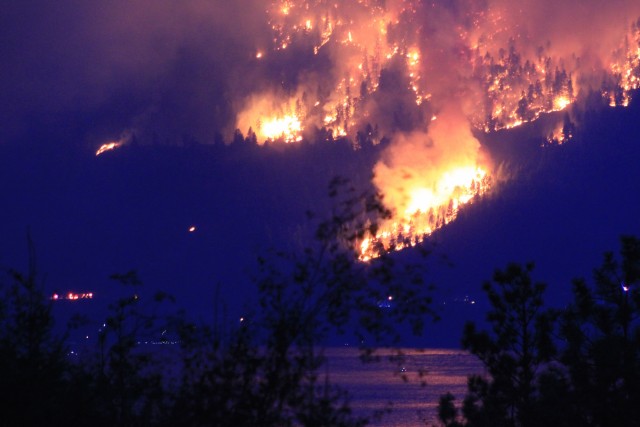 Fire crews are still actively battling an aggressive fire off Westside Road, as an evacuation order is being prepared for the area.

BC Wildfire Service and Wilson’s Landing Fire Department crews are on the scene fighting the blaze, which was ignited yesterday by lightning and flared up this evening with very gusty winds.

Residents living between 4401 and 4163 Westside Road are currently being evacuated by the RCMP.

Evacuated residents are being asked to report to the Emergency Support Services reception centre at the Westbank Lions Community Hall at 2466 Main Street in West Kelowna.

Volunteers will be on hand after 11:30 p.m. to assist evacuated residents with food, lodging and clothing needs.

An evacuation alert is also now in place for residents and properties along Denison Road, as well as Camp Mewata and in Caesars Landing.

Residents in that area should be prepared to leave their homes on short notice should conditions require an upgrade to an evacuation order.

People are requested to stay away from the immediate area and RCMP officers are on scene doing traffic control.

BC Wildfire Service reports the four to five hectare Westside Road Fire is still burning down slope threatening homes in the area.

Fire information officer Kelsey Winter says, as of 11 p.m., there have been no reports of lost homes or structures.

The wildfire has also knocked out power to 1,390 customers north of the flames.

BC Hydro reports power went out to customers north of Westside Road, south of Whitemans Creek Road and west of Coral Beach Road at 9:54 p.m.

They do not yet have an estimate on when power will be restored.

DriveBC also reports Westside Road is closed is both directions from between Cinnibar Creek and La Cassa. There is no detour available and no estimated time of opening.

Castanet will have the latest details on the fire as they become available.

A wildfire is burning north of the Lake Okanagan Resort and moving fast, with reports residents in the Shelter Cove area are being evacuated.

Emergency officials were witnessed going door to door in that area.

The blaze can be seen from across the lake, and witnesses say it appears to be moving down the hill quickly, as fast winds move through the area.

Fire Information officer Kelsey Winter says the fire is currently four to five hectares in size and aggressive in nature, they are calling it rank four (out of a possible five).

A rank four is considered a highly vigorous surface fire that has a moderate to fast rate of spread along the ground. Trees are candling in the blaze.

She could not confirm whether an evacuation order has been put in for the Shelter Cover community, but says it is being considered.

The cause of the blaze is believed to be lightning.

The fire is reportedly as close as one kilometre from nearby homes – although unconfirmed.