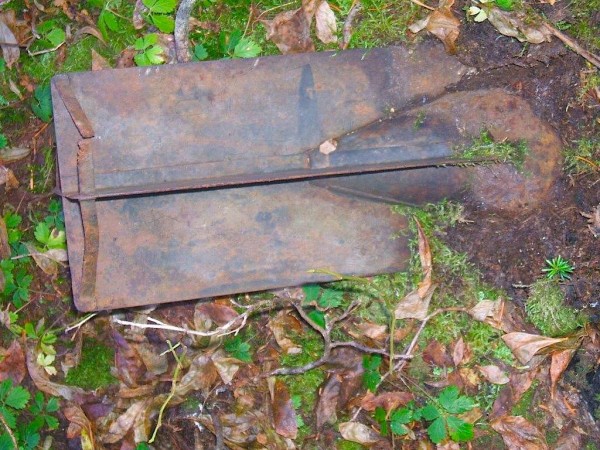 A navy bomb disposal team was called and arrived at the site Friday in the Monashee Mountains near Lumby, B.C.

"They confirmed without a doubt that it is a Japanese balloon bomb," said RCMP Cpl. Henry Proce.

"This thing has been in the dirt for 70 years .... There was still some metal debris in the area (but) nothing left of the balloon itself."

The forestry workers found the device Wednesday and reported it to RCMP on Thursday.

Proce, a bit of a history buff himself, accompanied the men to the remote area and agreed that the piece appeared to be a military relic.

The area was cordoned off and police contacted the bomb disposal unit at Maritime Forces Pacific.

It was a big bomb, Proce said. A half-metre of metal casing was under the dirt in addition to approximately 15 to 20 centimetres sticking out of the ground.

"It would have been far too dangerous to move it," Proce said. "They put some C4 on either side of this thing and they blew it to smithereens."

Between November 1944 and April 1945, the Imperial Japanese Army released more than 9,000 bomb-bearing balloons.

Assembled from bark and rice paper, in some cases by school children, the balloons were loaded with hydrogen and attached to a chandelier-type structure loaded with sandbags and incendiary bombs, said Andrew Burtch, director of research at the Canadian War Museum.

This one would have been equipped with two large bombs and four smaller ones that may have exploded on landing decades ago.

"It would go up into the jet stream and get pushed across the Pacific over the course of two or three days," he said.

"They were launched from beaches in Japan with the objective of creating havoc in North America, which had until then been relatively untouched by the war."

As hydrogen depleted, the balloons would lose altitude so the devices were rigged with barometers and timers to drop sandbags as necessary to keep the balloon aloft.

It is estimated that at least 1,000 made it over the ocean and as far inland as Michigan and Manitoba.

"It's quite an ingenious device," Burtch said. But "in the end, not too effective."

There were no deaths reported in Canada, but an Oregon Sunday school teacher and five teens were killed by one in 1945.

Canadian Navy Lt. Paul Pendergast said the bomb disposal unit is called about once a month for suspect objects.

"Sometimes they're a souvenir someone kept from World War II, and they may be inert or they may be live," he said.

When they pose a hazard, the items are blown up on site.

Metal rings and other part of the device were found in the area and Proce said he hopes they will be put on display at the museum in Lumby, 460 kilometres east of Vancouver.

A piece of history has been unearthed in the hills east of Lumby.

A Tolko employee contacted Lumby RCMP Thursday morning after discovering what is believed to be an unexploded WWII Japanese balloon bomb in an area off Thunder Mountain Forest Road.

The bomb was partly embedded in the ground with the bush. 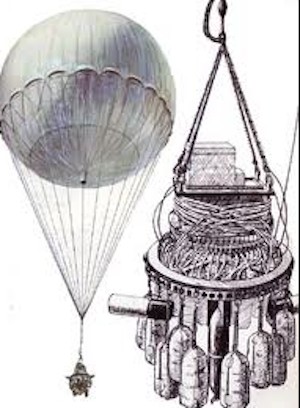 RCMP spokesman, Gord Molendyk says the suspected bomb was photographed before a call went out to the military bomb disposal unit in Esquimalt.

The unit arrived Thursday night and are expected to dispose of the bomb today.

Prior to disposal, Lumby RCMP are hoping to gather a few pieces of the bomb found nearby and donate them to the Lumby Museum.

"There are a couple of pieces they would like to bring back and, I think that is a neat thing ... preserving a little bit of history in the local area," says Molendyk.

They are hoping to collect the large aluminum rings and possibly a fin from the bomb.

Between November of 1944 and April of 1945, it is estimated Japan released about 9,000 of these balloon bombs. It is estimated about 1,000 reach North America.

Six people, five children and the pregnant wife of a pastor in Bly, Oregon, were killed May 5, 1945, as they played with the large balloon they found in the woods.

They were the only casualties reported on the North American mainland during WWII.

Molendyk says it has been years since one of these bombs was discovered.

The North Okanagan is no stranger to the discovery of unexploded ordnances.

Several unexploded bombs have been found, many had already been fired as part of training exercises.

Most recently, an ordnance was found and retrieved from Cosens Bay a little more than a year ago.

Molendyk says anyone who comes across an unexploded shell should mark the area and contact police.

Regardless of the age of the device, Molendyk says police always treat these objects as live.

If you were the one who discovered the bomb, please email us at [email protected] We would love to hear your story!