An admitted member of the Hells Angels Kelowna chapter told a judge Wednesday that he did not know of, or see, any of the numerous weapons found during a vehicle stop in Salmon Arm in 2010.

Furthermore, 47-year-old Joseph Bruce Skreptak said he and three other men (Cory Montemurro, Carl Ennis, and Dennis Miner) had been in the area to look at a property he was interested in buying, at the time of the traffic stop in which the weapons were found. 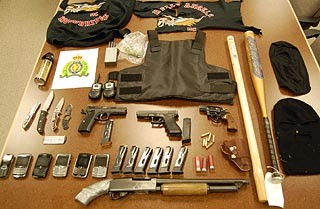 Police allege they smelled marijuana coming from inside the Jeep Grand Cherokee during a routine traffic stop the night of Nov. 25, 2010. Upon arresting all four men, officers found several firearms, body armour, knives, bats, bear spray and a cell phone jamming device. They also found a small amount of marijuana in Skreptak’s underwear – his preferred hiding place, the court heard.

On the stand for most of the day, Skreptak reiterated numerous times that he had no knowledge of any weapons inside the vehicle, aside from the pocket knife he always carried on his person. He also denied knowledge of anyone talking about any weapons that day or seeing any of the other three men with any weapons.

According to Skreptak, he had been in contact with Ennis a few days prior and upon finding out he was co-owner of a mortgage firm, alerted Ennis of his desire to buy property for a medical marijuana growing operation.

While admitting under cross examination by Crown counsel Sandra Dworkin that he did not have a medical growing license at the time of the incident, he was still interested when Ennis told him about a property near Salmon Arm a few days later.

On the day in question, Ennis showed up at Skreptak’s lakeside home but was turned away and told to come back later as Skreptak had been up to the early morning hours playing poker.

Ennis returned around 4:30 p.m. and together they got into an SUV with two other men that Skreptak admitted to barely knowing, saying he had met Miner only once before and knew Montemurro as a “long term acquaintance”. 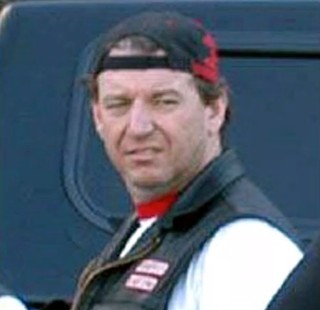 Despite this lack of familiarity, he told Dworkin that he did not ask why they were coming along to look at a property in Salmon Arm on a snowy winter night in late November.

After falling asleep in the vehicle, Skreptak told the court he awoke as they arrived at a restaurant near Salmon Arm where they met two more men – one of whom was said to be the property owner’s son Tom.

The group had a quick meal and then headed down a road for about 20 minutes in the vague direction of Kamloops. When asked to clarify where the property was, Skreptak was unable to say and doubted he would be able to find it again.

He told the court they arrived and entered the home, then he and Tom spent the next hour and a half checking out the outbuildings while the others apparently stayed inside the main house.

Upon returning Skreptak smoked two joints with the property owner, named Dan, and then asked for an additional amount of marijuana that he double bagged and put away.

It was while Skreptak, Montemurro, Ennis, and Minor were returning to Kelowna that they were pulled over by police.

According to Crown, the officer on scene had pulled over the SUV for speeding and noted an odour of marijuana while returning a driver’s license and rental insurance papers to Montemurro. He noticed the smell while reaching across the passenger seat where Skreptak was seated.

Dworkin took issue with many points of Skreptak’s testimony, most notably the decision by the accused to venture out to look at a property with semi-strangers at night, and his reasoning for wanting to move to Salmon Arm in the first place. Skreptak had said his common law wife (who was pregnant at the time) wanted to be nearer to her hometown of Quesnel, but Dworkin pointed out this new residence would not be much closer to Quesnel than Kelowna already was. She also asked about schools and hospitals in the area, to which Skreptak said he hadn’t considered at that time.

Skreptak and Montemurro each face a dozen weapons charges.

Charges against Ennis and Miner have been stayed by the Crown.