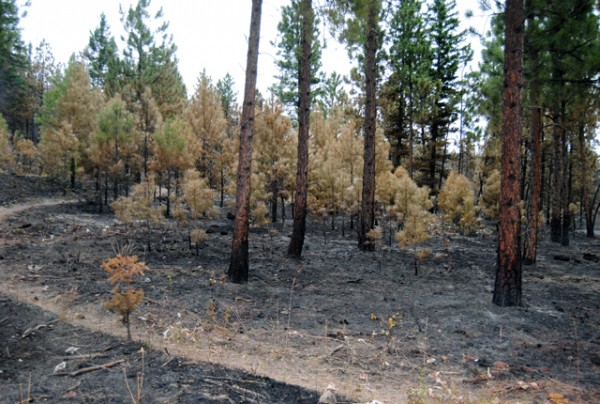 The Smith Creek Forest Fire, which began Thursday, July 17, is currently 60% contained. BC Forest Service crews are working to achieve 100% containment and West Kelowna Fire Rescue will continue to patrol interface areas to ensure the fire does not spread to residential areas.

An Evacuation Order for the Smith Creek Fire remains in effect for eight privately owned lots in the interface areas immediately above Smith Creek, Tallus Ridge and Shannon Woods Neighbourhoods, including all properties accessed off Dixie Road. Two residents living on a property accessed off Dixie Road remain under Evacuation Order, the other properties are unoccupied.

The Evacuation Order area, including parks, trails and public and private lands, is closed to the public, including Wildhorse Park and Tallus Park.

The Smith Creek Fire remains active and approximately 2,500 residents who have returned to more than 1,100 homes remain on Evacuation Alert and should be prepared to leave on short notice. The public must stay out of fire-affected areas for their own safety and obey all warning and hazards signs.

With weather forecasts indicating potential for heavy rain, the fire department is monitoring the area for potential run-off from fire affected areas and the District’s Engineering Department has been placed on standby.

Residents are asked if they see any fire activity related to the Smith Creek fire, not to call 9-1-1 as crews will still be actively working in the area and monitoring the situation.

Further updates will be posted, on an as needed basis, at www.cordemergency.ca.

Another good day for crews fighting the Smith Creek wildfire above the hills in West Kelowna.

Cooler temperatures and lighter winds Monday allowed crews to work on hot spots and flare ups within the perimeter of the fire.

The forecast continues to be favourable with temperatures expected in the mid 20's today (Tuesday).

Some rain is forecast today, with 10mm to 15mm expected to fall Wednesday. Thunderstorms are also predicted for Wednesday.

Officials say that while many visible signs of fire activity have been reduced, the public is reminded that work does continue. Crews will be using local roads to access the fire and the public may notice increased traffic volumes. Motorists are asked to use caution on and around the roadways.

The fire has not grown over the past 72 hours and remains at 260 hectares in size with 60 per cent containment.

"Our objectives are to safeguard the homes along the base of the fire and reinforce guards that have been established," says Fire Information Officer, Melissa Welsh.

Crews will work to establish 50 feet of wet line around the entire fire perimeter.

All but a few of the estimated 2,500 people forced from their homes remain on evacuation order.

Those allowed to return home remain on evacuation alert and must be ready to leave at a moments notice.

The fire has been deemed to be human caused, however an exact cause is not known and may never be known.