'I abducted your girls' 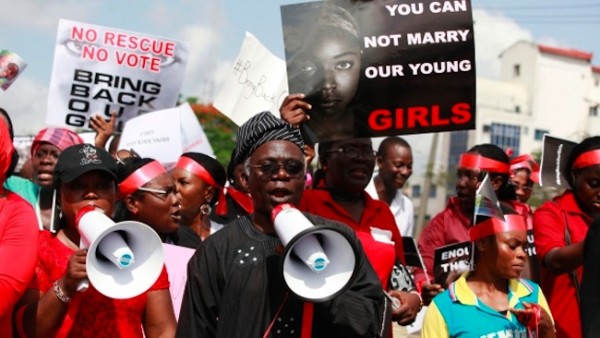 Nigeria's Islamic extremist leader is threatening to sell hundreds of teenage schoolgirls abducted from a school in the remote northeast of the country three weeks ago.

Abubakar Shekau for the first time also claimed responsibility for the April 15 mass abduction, in a video received by The Associated Press on Monday.

"I abducted your girls," he said. And, "By Allah, I will sell them in the marketplace."

Nigeria's police have said more than 300 girls were abducted: 276 remain in captivity and 53 have managed to escape.

The mass abduction and the military's failure to rescue the girls and young women has roused national outrage with protests in major cities. Protesters accused President Goodluck Jonathan of being insensitive to the girls' plight.

Jonathan says his government and the military are doing everything possible.

A leader of a protest march for the missing schoolgirls said that Nigeria's first lady ordered her and another protest leader arrested Monday, and expressed doubts there was any kidnapping and accused them of belonging to the Islamic insurgent group blamed for the abductions. The first lady's office denied there were any arrests.

Saratu Angus Ndirpaya of Chibok town said State Security Service agents drove her and protest leader Naomi Mutah Nyadar to a police station Monday after an all-night meeting at the presidential villa in Abuja, the capital. She said police immediately released her but that Nyadar remains in detention. Deputy Superintendent Daniel Altine, police spokeswoman for Abuja, said she had no information but would investigate.

As AP journalists waited outside the Asokoro police station in Abuja where Nyadar was being held, they watched a vehicle from the presidential State House drive up, saw her bundled into the car and driven away.

Ayo Adewuyi, spokesman for first lady Patience Jonathan, said there was a meeting but he was unaware of any arrests. "The first lady did not order the arrest of anybody, and I'm sure of that," he told the AP.

In a report on the meeting, Daily Trust newspaper quoted Mrs. Jonathan as ordering all Nigerian women to stop protesting, and threatening "should anything happen to them during protests, they should blame themselves."

It was unclear what authority Mrs. Jonathan would have to give such orders.

Protesters said they are also concerned that they have been unable to reach two other people who were at the meeting: the principal of Chibok Government Girls Secondary School, Asabe Kwambura, and the town's local government chairman, Bana Lawal. "They were supposed to meet with us this morning, they were last seen at the (presidential) villa, and we suspect they are being kept there to stop them speaking out," said Tsambido Hosea Abana, chairman of the Chibok community in Abuja, who has a sister and three nieces among the missing girls.

Some girls who have escaped from the mass kidnapping said their captors identified themselves as Boko Haram.