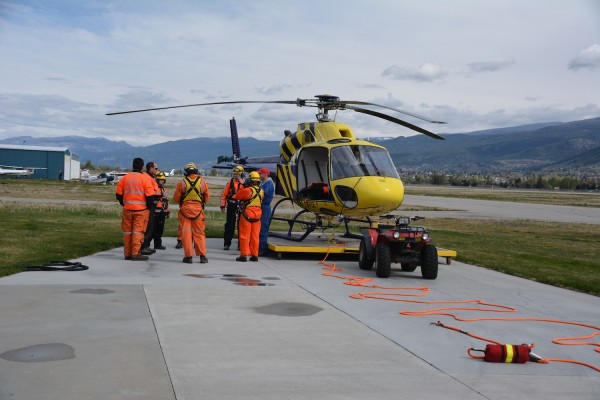 Penticton and Kamloops Search and Rescue teams worked together Friday afternoon to rescue an injured hiker off Mt. Savona.

Late in the afternoon with daylight growing short and bad weather moving in, the Penticton team responded with their Helicopter External Transport System (HETS) Team to assist the Kamloops SAR and BC Ambulance in the delicate rescue.

SAR Manager Richard Terry says he received a call at 3:55 p.m. that two hikers on Mt. Savona took a short cut to get to a geocache sight close to the caves.

“While off trail, one hiker displaced a boulder that rolled on the second hiker, breaking his leg and badly damaging his arm,” explained Community Liaison Officer for Penticton SAR, Randy Brown.

Crews on the scene decided that because of dangerous terrain, daylight disappearing and the fear the hiker may go into shock a quick response from the HETS team was critical.

The Penticton team was able to quickly rally and have three agents and a pilot up in the air and in the area (about an hour away) by 6 p.m.

There they found the patient conscious and in good spirits.

“With a storm and lightning approaching the team worked quickly to package the patient,” said Brown.

“Neatly tucked into the clamshell stretcher with an HETS technician by his side, the patient was raised from the scene on a long line below the helicopter and flown to a nearby field for an awaiting BC Ambulance just as the rain began to fall.”

The man was taken to hospital and is in recovery.

Three different search and rescue teams from the area (Kamloops, Logan Lake and Nicola Valley) as well as BC Ambulance and Penticton HETS team involving 19 personnel were part of the successful rescue mission.